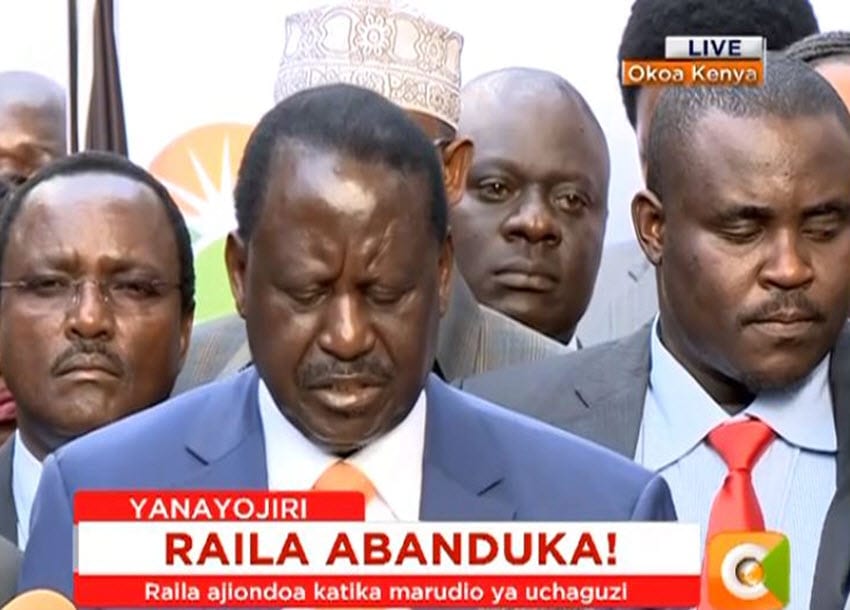 Speaking to the media at Okoa Kenya offices in Nairobi, the opposition chief accused the electoral body of lack of willingness to undertake any changes to its operations and personnel to ensure that the “illegalities and irregularities” that led to the invalidation of the 8th August, 2008 do not happen again.

“In a constitutional democracy, we should not be debating about a free and fair election…. We should have been working together to ensure that we uphold these values as they are not only our national values but are also the foundations of a credible electoral system,” said Odinga.

While terming the October 26th poll as “worse than the previous one”, the opposition coalition was keen to note that NASA’s demands were only based on the Supreme Court’s ruling that ordered that the repeat poll be held in strict conformity with the Constitution and written law.

“Instead, the case for proceeding with the fresh election on 26 October without these changes is being made on the grounds of time constraints,” added Odinga.

Odinga further hit out at Jubilee administration’s proposed amendment to the election laws terming it as a demonstration of unfair competition.

“The only election Jubilee administration is interested in is one that it must win, even unlawfully,” he said.

Odinga’s announcement comes just a day after President Uhuru Kenyatta dared him to withdraw his candidature if he is not ready to participate in the repeat poll.

Speaking during a meeting with a section of political leaders drawn from Coast Region at Serani Grounds in Mombasa County, the Head of State said that Kenyans have become disillusioned by the prolonged political period further accusing the NASA leader for what he termed as “holding the country back.”

The opposition coalition has suffered a series of defections since the Supreme Court of Kenya nullified the August 8 Presidential election results.

On Monday, the opposition chief claimed that Jubilee has set a defector’s fund that is being used to ‘buy’ NASA poll losers amid countrywide defections.