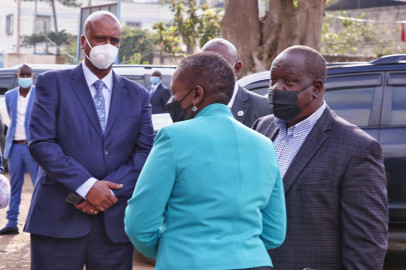 The government has inked a deal with Orbit Chemicals, the owners of the disputed 95.2 acre piece of land in Mukuru kwa Njenga, that will see residents of the Nairobi slum spared from forceful evictions.

As per the agreement, residents living on the land subdivided into 1328 plots will be allowed to keep the structures and eventually own them with Orbit Chemicals set to speed up the issuance of title deeds to the property’s occupants.

Ten out of the 1328 plots have been set aside for the development of public projects such as schools and religious facilities while close to 25 acres have been reserved for the upgrading of access roads in the slum in a project steered by the Nairobi Metropolitan Services (NMS).

The deal was brokered by Interior CS Fred Matiang’i, his Lands counterpart Farida Karoney and Attorney General Kihara Kariuki, following a closed-door meeting with the private entity’s management in Nairobi.

“Under the deal, the Government will waive all taxes and applicable fees running into millions of shillings and provide free survey services on priority basis to facilitate the relevant transfer of ownership,” the Ministry of Interior said in a statement on Friday.

“Of the remaining plots, 626 have already been purchased by structure owners with 456 among them effectively transferred to new owners. The new arrangement will focus on the balance of 703 plots that are still owned by the private firm,” the Ministry of Interior added.

The exercise is being fast-tracked owing to allegations that a number of politicians and influential persons have invaded the land and taken advantage of the evictees situation by, among other ways, sponsoring invasions by outsiders with a promise for ‘free’ land.

The development comes just a few days after President Uhuru Kenyatta called an end to the forceful evictions in the slum and relocation of victims forced to leave on Christmas Day.

After President Kenyatta's order, CS Matiang’i promised Mukuru kwa Njenga elders that he would speed up negotiations with Orbit Chemicals over the disputed land. A number of law enforcement officers in the area were similarly sent on compulsory leave owing to their alleged involvement in the evictions.

“We respect court orders, but we will implement them in a framework that also respects the interests of the people we serve. We have called some of our officers to account,” CS Matiang’i said then.