Revealed: Mbagathi maternity wing had been ordered to close before fire incident 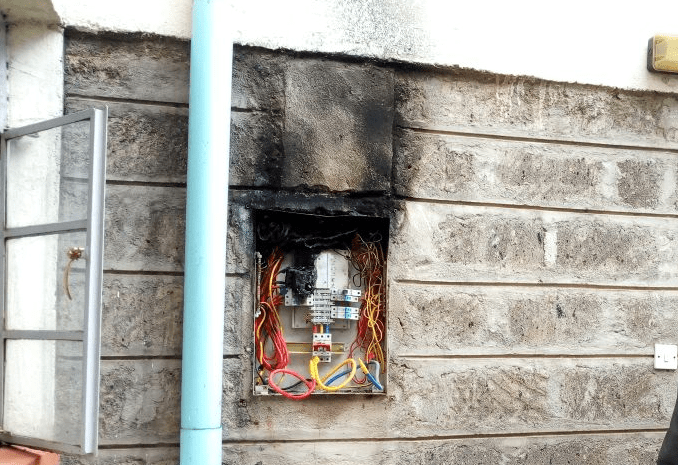 Emerging reports indicate that Mbagathi Hospital’s maternity wing was supposed to have been closed and out of operation even prior to the Tuesday night fire incident which left mothers and their newborns stranded.

This is according to a site investigation report dated April 26, 2018, from the Nairobi Chief Officer, Roads, Public Works and Transport, Eng. F.N Karanja.

In the assessment request letter, Dr. Ogaro had stated that the maternity wing “which was constructed some years back has exhibited certain structural defects that have led to water leakages from visible cracks on the walls and ceiling.”

“This floods the floor and creates electric currents that expose patients and staff to electric shock.”

Dr. Ogaro had further said: “In addition, the drainage system has been experiencing frequent blockages and backflows resulting into unsanitary condition. This also exposes patients and staff to infections.”

According to the report, as seen by Citizen Digital, inspection of the Mbagathi Hospital Maternity Wing was made on March 20, 2018.

Among the observations made were inadequate strength of the structural elements of the building as evidenced by the appearance of cracks on the walls, slabs and beams.

The report further added that the wing had quite a number of irregularities notably; deformation and sagging on beams, leakages on walls, floors and roofs, as well as electric shocks on water pipes, showers and incubators.

There were also failed drainage systems for both foul and storm water, and lack of facilities for use by the physically disabled.

Following these observations, the report recommended that the maternity wing be closed and all the patients be accommodated elsewhere with immediate effect.

It further added that, “a thorough audit of the building be undertaken by a team of professionals in the built environment that should include but not be limited to an architect, a structural engineer, an electric and a mechanical engineer.”

During the Tuesday night incident, some pregnant mothers were however forced to spend the night in the cold as the hospital staff tried to extinguish the fire.

“16 newborns were in the incubator at a time when the building caught fire but fortunately there is no death reported,” Kilimani Police boss Michael Muchiri said.

No casualties had been reported from the incident by Wednesday evening.