Russia probe may be headed for climax in 2019 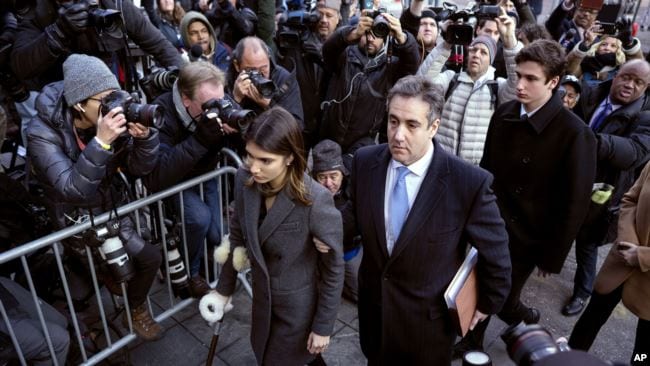 As 2018 draws to a close, the Russia investigation led by special counsel Robert Mueller appears to be gaining momentum, built on an assortment of guilty pleas and convictions of former associates of President Donald Trump over the past year.

Some analysts predict the probe could headed for an epic climax in 2019 that could have a huge impact on the next presidential race in 2020.

Cohen was sentenced to three years in prison on charges that include campaign finance violations related to hush money payments made to two women who allegedly had extramarital affairs with Donald Trump before he became president.

Trump has previously denied the affairs and has also denied Cohen’s allegation that Trump directed him to make the payments to the two women.

Flynn appeared in court this past week expecting to be sentenced for lying to federal investigators last year. Flynn admitted lying to the FBI about his contacts with the then-Russian ambassador during the presidential transition.

Flynn and his attorneys were hoping for no jail time. But Federal Judge Emmet Sullivan unexpectedly lashed out at the retired Army general.

“Arguably you sold your country out,” the judge said. Flynn’s sentencing was put off to see if he can offer additional cooperation to the special counsel’s investigation.

So far, 33 individuals have faced charges in connection with the Russia probe, including 26 Russian nationals alleged to be behind election-related cyberattacks in 2016.

Even as the Russia probe appears to be gaining steam, the president remains adamant that no evidence has surfaced of collusion between his 2016 campaign and Russia.

“On the Mueller situation, we are very happy with what we are reading because there was no collusion whatsoever,” Trump told reporters recently outside the White House. “There never has been. The last thing I want is help from Russia on a campaign.”

Opposition Democrats remain poised to defend the Mueller investigation as they prepare to assume the majority in the House of Representatives next month.

Though Republicans lost their House majority in the November midterm elections, they added two seats to their majority in the Senate and will hold a 53-to-47 seat edge in January.
Cohen’s role

Cohen’s case was handled by federal prosecutors in New York and the campaign finance violations have put the Trump White House on the defensive and made Cohen a key player in the investigation.

“What has happened since Michael Cohen has been cooperating with Robert Mueller is a lot more information related to the campaign,” said University of Connecticut legal expert Doug Spencer. “The first things that we learned about were campaign finance violations, potentially, with payments from President Trump’s campaign to women who were alleging affairs with him.”

The flurry of court activity in the weeks since the midterm election suggests the Mueller probe may be building toward a climax, says Third Way analyst Jim Kessler.

“So we are now getting the ‘big fish,’ people like (Michael) Flynn, people like Roger Stone, Michael Cohen, the president’s personal lawyer, who have either turned on the president or are on the ‘hot seat’ (in a vulnerable spot),” Kessler told VOA. “So the next 60 days should be very, very interesting, but it does not look like good news for the president.”

“Eventually, Mr. Mueller is going to have to show the public that there is collusion or there is not, and we will see what Mr. Mueller finds,” said Graham, who supports letting Mueller finish the investigation.

The Russia probe may be headed for a legal conclusion in 2019, but it may be up to Congress to deal with the political aftermath, possibly including the option of impeachment.

“There are a lot of legal issues that I can speak to, but the real ultimate question here is a political one,” said legal analyst Ric Simmons of Ohio State University. “And depending on what is in this report, what is the political fallout both with the American people and with Democrats, but especially with Republicans in Congress.”

In an interview with Reuters this month, Trump said he was not concerned with the prospect of being impeached in connection with the Russia investigation. “I think that the people would revolt if that happened.”

Recent polls show a majority of Americans favor Mueller being allowed to finish his investigation. But Trump’s repeated attacks on the probe as a “hoax” and a “witch hunt” have slightly eroded the extent of public support over time.

Whatever comes out of the Russia probe could have a major political impact in 2019 as both President Trump and a large group of potential Democratic contenders look ahead to the 2020 election.