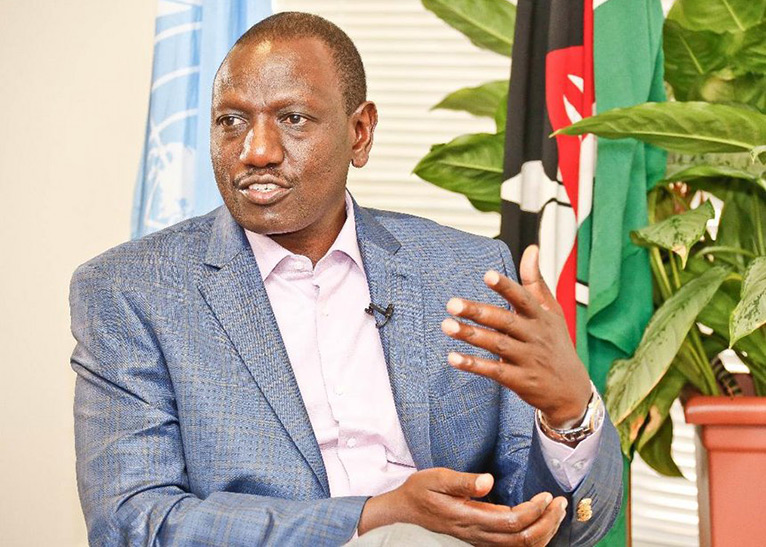 Ruto said leaders should work together in confronting insecurity challenges occasioned by banditry and cattle rustling incidents instead of introducing politics into such matters.

Addressing wananchi on Monday at Chesongoch Catholic Church grounds in Elgeyo Marakwet County after inaugurating the first group of 200 newly recruited police reservists, Ruto asked politicians to stop taking the plight of those suffering as an attempt to score cheap political goals.

He said politicising security issues could affect restoration of peace among communities in the region.

“Leaders should take a stand that will help bring peace in this region instead of introducing cheap politics into such issues,” said Mr Ruto.

“We should be part of the solution to the insecurity problem in this area and not part of the problem,” added Ruto.

At the same time, Ruto, announced that the Kerio Valley belt will be gazetted as a dangerous area for a security operation to flush out cattle rustlers and criminals who were killing people.

The DP said the government would protect police officers discharging their duties in accordance with the law against outside interference.

“I want to assure our security officers that the government will solidly stand behind them in protecting the lives and property of Kenyans,” said Mr Ruto.

He said more security camps would be established in Kapkobil, Kabetwa, Murkutwo and Kaben among other areas that had witnessed cattle rustling incidents.

The Deputy President said the Kerio Valley belt that covers parts of Baringo North Marakwet and Pokot would be gazetted as a dangerous and disturbed area to pave way for security operations in the region to curb cattle rustling.

Ruto said the operation would begin immediately and under one command.

“Those who have crossed over to neighboring counties or sub counties and displaced its owners will be driven back to their homes,” said the deputy president.

He added: “We will not allow other people to raid homes and occupy them in the pretense of searching for pasture.”

The Deputy while in Kipsaraman in Baringo North Constituency witnessed the swearing in of 151 police reservists who will join 100 Security officers from regular police administration police and rapid deployment unit.

Ruto, who also addressed another security meeting in Arabal in Baringo South Constituency, said any criminal who has weapons, steal cattle and kill innocent women and children must face the full force of the law.

“With the ongoing recruitment of more police reservists, it is now clear that we have stepped up efforts aimed at curbing crime and ending the practice of cattle rustling which has no room in this 21st century” said Ruto.

The Deputy President asked wananchi in the region to join the Government in community-policing programme.

He said while the Government was beefing up security, wananchi had a duty to report criminals in their midst to the authorities.

“Those who have made cattle rustling their source of income should find something else to do, as those caught risked long jail terms. We have already arrested 25 cattle rustlers and their cases are on,” said Ruto.

He said Ksh5million would be allocated to secondary schools as fees for pupils whose parents lost their livestock to cattle rustlers.

Inspector General of Police Joseph Boinett said he was optimistic that the newly recruited police reservists will help complement the work of other security officers in the region.

“I am confident that these police reservists will help other security personnel in confronting the challenge of cattle rustling as they understand the area,” said Boinett.