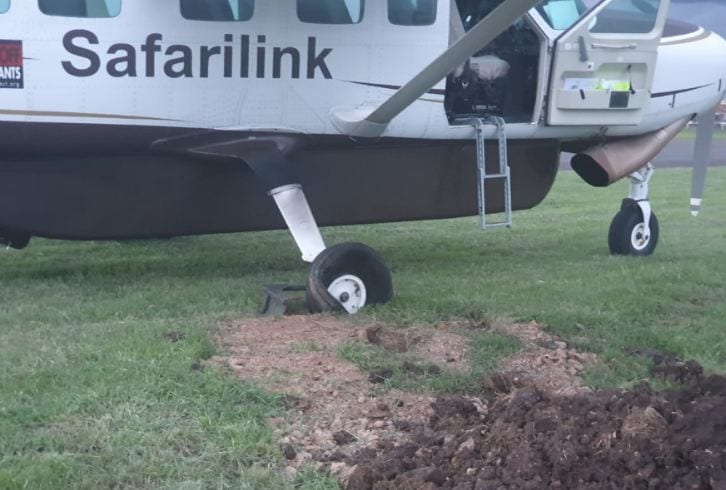 A Safarilink plane that was from Lamu skidded off the runway at Wilson Airport on Tuesday evening after a tyre burst.

A press statement from the airline however said none of the 12 passengers were injured.

“Our aircraft a Cessna Caravan C208 registration 5Y-SLJ had a tyre burst on landing at Wilson Airport at 1820… the aircraft was procedurally removed from the runway,” the statement reads.

The Kenya Civil Aviation Authority (KCAA) explained that the runway had to be closed for 30 minutes for the plane to be towed away.

“The incident is regrettable,” the authority said.

This comes just days after a Silverstone Air plane made an emergency landing at Eldoret International Airport after a tyre fell off during take-off.

Passengers were later booked onto another airline, Skyward, for the remainder of the journey to Nairobi.

The incident occurred less than a month after another plane operated by Silverstone Air crashed at Wilson Airport shortly after take-off.

KCAA has since begun auditing Silverstone Air Services following the series of incidents.

“The audit is being performed in order to determine the level of compliance with the current Civil Aviation regulations and their own company approved manuals and procedures,” said Director General Capt. Gilbert Kibe.

Kenyans took to Twitter to express their dismay and alarm over the increased number of incidents in the past one month.

The Government of Kenya is patiently waiting for a Silverstone Aviation plane to kill several Kenyans before taking action. Patience pays here in Kenya. In the meantime, stop noising. Just don’t board the damn plane. ^DoS

#SafariLink How is the situation at Wilson airport, From the ground, things are shocking for sure. pic.twitter.com/0NPR4IxKCF

Potholes on the runway Wilson Airport management should be held Responsible for this incident #SafariLink pic.twitter.com/sXwqa7eohR

“We need authority have random inspection of crafts at all destinations of arrival and departure. This week….2 Separate incident with Tyres,” Khalida Luweny said.