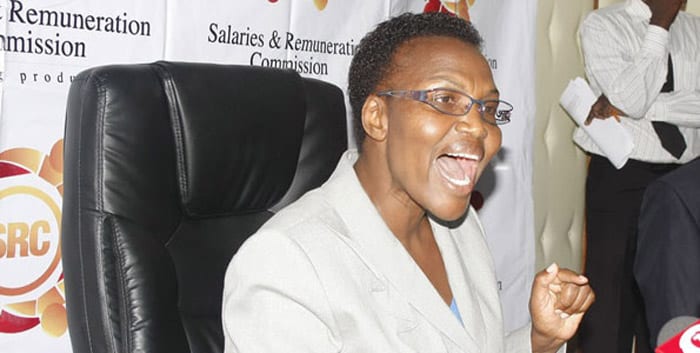 Salaries and Remuneration Commission (SRC) chair Sarah Serem has threatened to quit if her recommendations against teachers’ salary increment and wage bill are ignored.

Speaking at a stakeholders meeting at the Intercontinental Hotel in Nairobi on Tuesday, Serem said her team has given the government recommendations on the impracticability of salary increments in public service to cushion the economy and keep the wage bill in check.

“What we are doing is for the good of the country and we will have failed Kenyans if the increment is effected,” he said.

Serem further dismissed the motion filed by Budalangi MP Ababu Namwamba which seeks to slash salaries of state officers by 50 per cent, saying the move will not ‘quench’ teaches salary demands.

She stated that the government cannot sustain the 50 to 60 per cent pay increment from deducting salaries of state officers.

Serem defended the salary allocations of senior state officers saying the figures were arrived at after a job evaluation carried out by the commission.

The SRC chair’s declaration adds a new twist to the already complicated issue of teachers’ salary increments that has resulted in a protracted court battle between teachers’ employer Teachers Service Commission (TSC) and their unions.

Just last week, TSC filed a petition at the Employment and Labour Relations Court seeking to stop the on-going teachers strike by terming it illegal.

The case, which will be ruled upon on September 25, was necessitated by the teachers’ insistence that they will go on with their strike, which entered the fourth week on Monday, until the government effects the 50 to 60 per cent pay increment.

Even as Kenyans wait with bated breath for the ruling, things remain thick for students and their parents after the government ordered the closure of all public and private primary and secondary schools over students’ safety concerns.

In a statement signed by Acting Education Secretary Leah Rotich, the government said a decision to send the students home was aimed at dealing with the rising tension in schools following the on-going teachers’ strike that had left students unattended.

All Standard 8 and Form Four candidates were, however, advised to stay in school as they prepare for the forthcoming national exams, which will run as scheduled.

President Kenyatta’s state of the nation address on Sunday further complicated the matter as he ruled out compliance to the court ruling, terming the teachers’ demand untenable.

Kenyatta said the government will have to raise taxes from 16 per cent to 22 per cent to meet the demands saying this will raise the cost of living and retard the economy.

Teachers, through their union, Kenya National Union of Teachers (KNUT) and Kenya Union of Post Primary Education of Teachers (Kuppet) have, however, remained adamant that they will not resume duty unless their salary increment is effected as per the Employment and Labour Relations Court ruling.