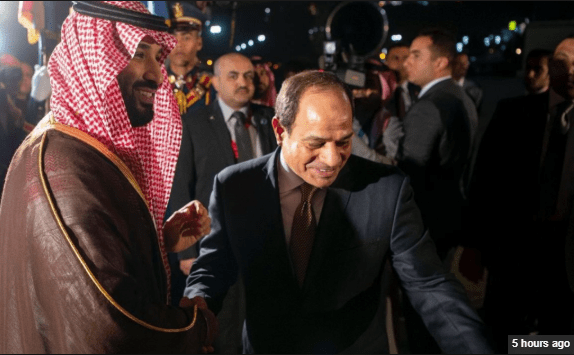 President Abdel Fattah el-Sissi greeted the heir to the throne of the world’s top oil exporter at the airport in Cairo when he arrived from Bahrain after a visit to the United Arab Emirates.

The killing of Khashoggi, a Washington Post columnist and a critic of the crown prince, at Riyadh’s consulate in Istanbul six weeks ago has strained Saudi Arabia’s ties with the West and battered Prince Mohammed’s image abroad.

Saudi Arabia has said the prince had no prior knowledge of the murder. After offering numerous contradictory explanations, Riyadh said last month that Khashoggi had been killed and his body dismembered when negotiations to persuade him to return to Saudi Arabia failed.

Turkey’s President Tayyip Erdogan has said the killing was ordered by the highest level of Saudi leadership but probably not by King Salman, putting the spotlight instead on the 33-year-old crown prince.

Egypt and Saudi Arabia have bolstered ties since Sisi took power in 2013 after ousting President Mohamed Morsi of the Muslim Brotherhood, which both countries have banned and designated as a terrorist organization.

The crown prince was accompanied by several high-ranking Saudi officials, including the foreign, trade and interior ministers and the head of general intelligence, the official Saudi Press Agency said.

Prince Mohammed is expected to travel to Tunisia after his two-day visit to Egypt before heading for a G20 meeting in Buenos Aires at the end of the month which will be attended by leaders from the United States, Turkey and European countries.

Dozens of Tunisian rights activists and journalists staged a small protest in the capital Tunis on Monday against Prince Mohammed’s planned visit over the Khashoggi killing.

Turkey’s President Tayyip Erdogan has said the killing was ordered by the highest level of Saudi leadership but probably not by King Salman, putting the spotlight instead on the 33-year-old crown prince.