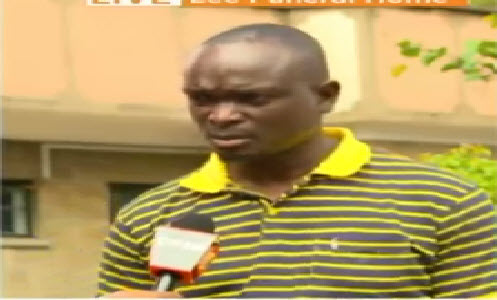 It has now emerged that Angelina Okoth, Ken Okoth’s mother was left out in the 3am cremation of her son at Kariokor in Nairobi County.

Speaking to Citizen Digital at the Lee Funeral Home on Saturday morning, Evans Olouch who is the late Okoth’s nephew intimated that the Kibra MP’s mother and other relatives were left out in an alleged Friday night meeting that decided on the cremation.

“The family did not meet, if the family met, then Ken’s mum would have been there,” said a seemingly irate Oluoch.

“We only woke up to news that Ken has been cremated. Ken’s mum was fully opposed to his cremation and wanted the body to be buried next to her house,” he added.

Oluoch further denied claims that Ken had wished to be cremated saying that if it were so, the mother would have  known.

Citizen Digital also learnt that Okoth’s mother was up until late Friday evening insisting Okoth should be buried at her rural home at Kabondo Kasipul.

According to Oluoch, their last meeting resolved that ODM leader Raila Odinga would provide a chopper to transport the body of the late Okoth for a funeral service at Rateng’ Secondary School at 10am and burial thereafter.

Nairobi MCA Anne Thumbi and her son were also left out and did not oversee the process as per a court order the previous day.

Oluoch also revealed that everyone including Okoth’s mother and his wife Monica knew about the existence of Anne Thumbi’s child.

“As a family we knew about Ken’s son and anybody in the family who will say otherwise will be telling a big lie. The family knew very well about Ken’s son even Monica knew about this child so taking DNA samples was just a waste of time since Ken was in full support of his child,” said Oluoch.

Oluoch apologized to the country on behalf of Okoth’s mother for the recent push and pull that caused Thumbi to move to court seeking to be included in the burial plans.

” Ken’s mum was confused and was pressurised to say things that were not true and she is very sorry for what happened. She really loves her grandson and we really support her coming out to say that Ken had a son,” said Oluoch.

” I am calling upon Anne Thumbi to bring Ken’s son to Okoth’s mother can embrace her as her grand child. He is our own and our blood and we fully support her”.

Funeral arrangements for the late Kibra legislator have been met with disputes from various camps with his wife Monica insisting he be cremated and his family maintaining that it is against the Luo culture.

Reports indicate that the body of Okoth left the Lee Funeral Home at about 1am for the crematorium.

In a statement to newsrooms on Saturday morning, ODM Secretary General Edwin Sifuna said that the late Okoth was cremated in the presence of his family in accordance to his wishes.

“This is to let you know that Hon. Okoth’s remains have been cremated this morning in accordance with his wishes and in the presence of his family. I thank all of you for the support and patience in the course of this journey. May he Rest in peace,”.