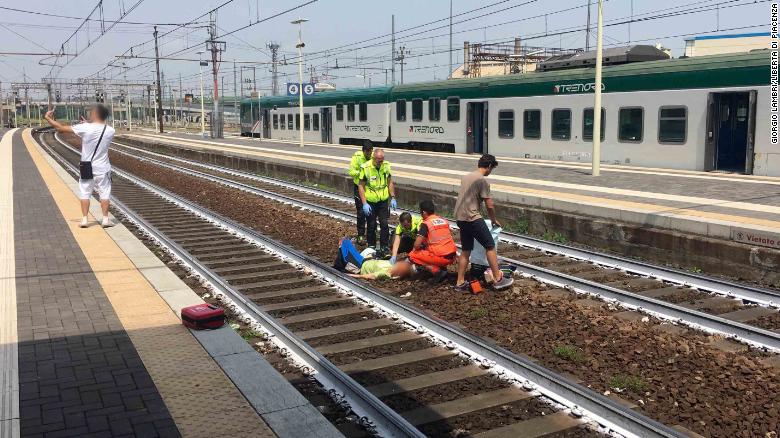 A photo of a man taking a selfie while emergency personnel were attending to a seriously injured woman on railway tracks has sparked outrage and an ethical debate in Italy.

Journalist Giorgio Lambri captured the scene May 26 from a station platform in Piacenza in northern Italy while reporting on a train hitting a Canadian woman.

Railway police saw a man taking the selfie and asked him to delete the photos before telling him to move away, according to Filippo Sordi Arcelli Fontana, Piacenza’s police chief. The man is not under investigation.

The Canadian woman reportedly got out from the wrong side of the train and fell on the tracks. She later had a leg amputated in the hospital.

Lambri, who photographed the scene, wrote an article in local newspaper Libertà with the headline: “The barbarism you don’t expect: the ‘selfie’ in front of a tragedy.” He also posted a picture on Facebook.

“I am sure he’s not a bad person, just someone totally ignorant on the ethics of living,” Lambrisaid of the man who snapped the selfie.

“I am a veteran journalist who (has) extensively covered crime, and I have seen many terrifying scenes, but this made me really sad.”

“What’s his name? He should be shamed on social where he wanted to publish that picture,” a commenter said.

A commentary on La Stampa newspaper compared the act of taking selfies at disaster sites with a “cancer that corrodes the internet,” saying it’s a “worm that works within our soul.”

Taking selfies at disaster or accident sites is not new. Last year, residents near Grenfell Tower in London were outraged that visitors were taking selfies at the site of the deadly fire.

Sergio Pirozzi, the mayor of Amatrice, Italy, spoke out in April 2017 after visitors were spotted taking selfies in the small town after an earthquake killed nearly 300 people and destroyed historic landmarks.

In 2015, some New Yorkers faced criticism after taking smiling selfies at the site of an explosion in the East Village that killed two people.

And in 2014, a teenage girl from Alabama was publicly shamed after posting a selfie at the Auschwitz concentration camp in Poland, where an estimated 1.1 million people were killed during the Holocaust.