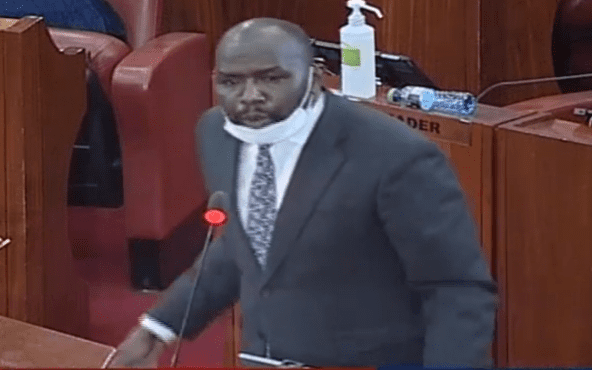 The Senate on Tuesday afternoon voted to adjourn the debate on the revenue sharing formula during their seventh sitting on the matter.

Elgeyo Marawet Senator Kipchumba Murkomen, rising on a point of order, sought the adjournment to give room for further consultation.

The motion passed after it was supported by 34 Senators while 26 voted against it; one Senator, Busia’s Amos Wako, resolved to abstain from the vote.

The Senate on six previous instances failed to agree on the revenue sharing formula proposed by the Finance Committee chaired by Kirinyaga Senator Charles Kibiru, plunging counties in a near financial crisis.

On the eve of Tuesday’s sitting, Treasury Cabinet Secretary Ukur Yatani convened a virtual meeting that was attended by Senate Speaker Ken Lusaka, the majority leadership and Council of Governors to find ways of easing the county governments’ financial strain.

Treasury agreed to release upto Ksh.29 billion that was not disbursed in the last financial year to enable counties deal with urgent expenses such as June salaries, operational costs and purchase of medical consumables as the country battles the COVID-19 pandemic.

But there was no resolution on a proposal to release to counties 50% of their share in the 2020/2021 budget based on last financial year’s allocation. The Commission on Revenue Allocation (CRA) recommended that route should the Senate stalemate persist.

Nairobi Senator Johnson Sakaja previously proposed an amendment to the Finance Committee’s formula seeking to use allocation to each county in the last financial year as a baseline for present and future share of the county share, and any increased resources be subject to a new formula.

Sakaja has been the subject of vilification for opposing a formula that would have allocated Nairobi and 27 counties more resources, while 19 counties would have had their share reduced.