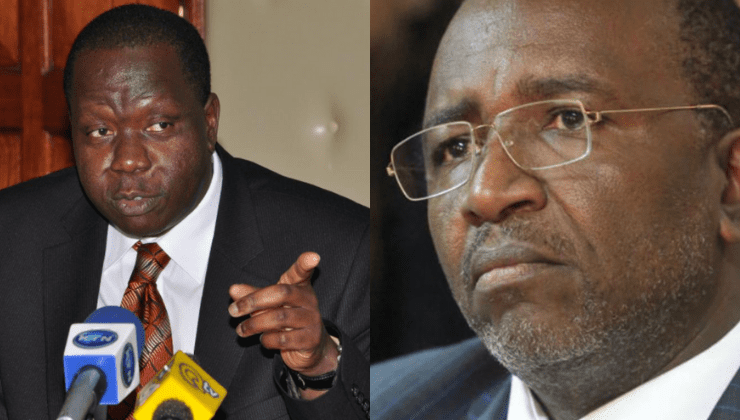 Interior Cabinet Secretary Dr. Fred Matiang’i has dismissed reports that the recent arrest of Meru Senator Mithika Linturi while en route to Parliament for a special sitting was done in malice over his stand on the BBI Bill.

CS Matiang’i, appearing before the Senate Security Committee led by Acting Chairman Fred Outa on Friday, said Linturi was arrested to record a statement in regards to 37 criminal charges linking him that the Directorate of Criminal Investigations (DCI) has been pursuing since 2018.

He told the committee that on November 1, 2018, Emily Nkirote Buantai made a report to the DCI headquarters alleging that she was a director of Atticon Limited together with Senator Mithika Linturi holding 50 and 1050 shares respectively.

Nkirote reportedly called for probe claiming that fraudsters had forged the Board of Directors’ minutes dated April 28, 2017 and removed them from the shareholding and appointed new directors.

Matiang’i said one Collins Kipchumba Ngetich, a Director of Barons Estates Limited, on November 15, 2018 reported to the DCI alleging that sometime in June 2018, he discovered that the directors of Atticon Limited had fraudulently applied for renewal of an overdraft facility of Ksh.I00 million without his consent.

Ngetich added that upon carrying out a search at the Companies Registry, he discovered that Barons Estates Limited was fraudulently removed from the shareholding of Atticon Limited using forged documents.

“Since the two complaints revolved around the same personalities and entities, they were consolidated and an inquiry file was opened. The investigations were conducted and all persons of interest were interviewed and 26 statements recorded, documents collected and those suspected to be fraudulent, 33 in number were subjected to forensic examination and results obtained,” Matiang’i told the committee.

The CS added that on October 28, 2020 the file was re-submitted to the ODPP, who again returned it on November 16, 2020 for further investigations.

The DCI once again re-submitted the file to the ODPP on January 28, 2021, who returned it on February 9 with consent to prosecute the suspects; Senator Linturi and Ms. Nkirote.

According to CS Matiang’i, the two face at least 37 counts of criminal charges among them: giving false information to a person employed in the Public Service; conspiracy to defraud; forgery; impersonation; obtaining credit by false pretence; fraudulently procuring the registration of a charge document; as well as intent to defraud.

Senator Linturi, on his part, accused the police of malice in the manner he was arrested saying they just would have summoned him to record a statement and he would have obliged.