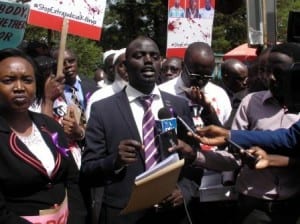 Operations were paralysed at the Eldoret High Court on Monday morning after advocates downed their tools protesting transfer of judges and magistrates.

The lawyers, who staged demonstrations along Eldoret streets, said there are many pending cases in the court and it was not in order for the Judicial Service Commission (JSC) to transfer the judges.

“We have had a mass transfer of magistrates and judges with no replacements. Generally, for the last one year the High Court here has not been working so you can see that has really affected practice among the advocates,” lamented one advocate.

“We have been having meetings with the JSC, we also had a meeting with the Chief Justice but those meetings have not yielded any fruit. That is why we are saying that now the only language the JSC is going to understand is this.”

According to North Rift Law Society of Kenya chairman Zephania Yego, there are over 4,000 cases pending since the transfer of three judges a month ago.

“Eldoret has one of the biggest backlogs in Kenya, so as advocates we are requesting that this situation be taken seriously,” Yego said.

Justice Kanyi Kimondo was transferred in February to Kisii High Court and was to be replaced by Lydia Ojode from Nairobi.

“I don’t know why someone would be transferred before clearing the cases they have found here. Now they are going on transfer without dealing with those matters,” Yego added.