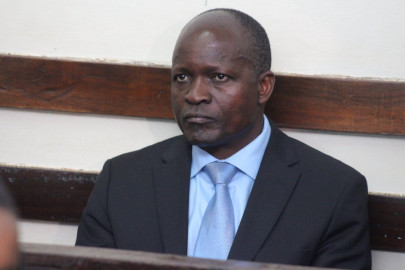 The Sharon Otieno murder trial in which Migori Governor Okoth Obado, his assistant Michael Oyamo and clerk Casper Obiero stand accused of planning and executing the Rongo University student’s murder went on Thursday with three witnesses taking to the stand.

First on the dock was Dr. Haron Odiero, the practitioner who received and treated a protected witness who is reported to have jumped out of a moving vehicle when he was abducted alongside Sharon Otieno.

Obiero told the court that the injuries on the witnesses' hands and knees were consistent with the narrative of jumping off a moving vehicle.

Next in line was police constable Oletuai Birgen who was attached to Homa Bay Police Station that provided reinforcement upon receiving the initial abduction report. He confirmed that the witness had trousers torn at the knees and bruises on the limbs.

The line of questioning was no different for police constable Lomen Leseren who also worked at Kendu Bay Police Station in September 2018. He  was taken to task by the defence team over the kind of conversation he had with the protected witness.

With the three before justice Cecilia Githua, the prosecution sought to prove that indeed the man who claimed that he was abducted for trying to investigate Obado’s relationship with Sharon, was abducted and saved himself by jumping out of the moving vehicle. The vehicle belonged to Obiero who was at that time a clerk at Migori County.

The court was previously told that Oyamo lured the two into the vehicle claiming that he would grant them audience with Obado.

More prosecution witnesses are expected to be presented before court from the 7th of next month.