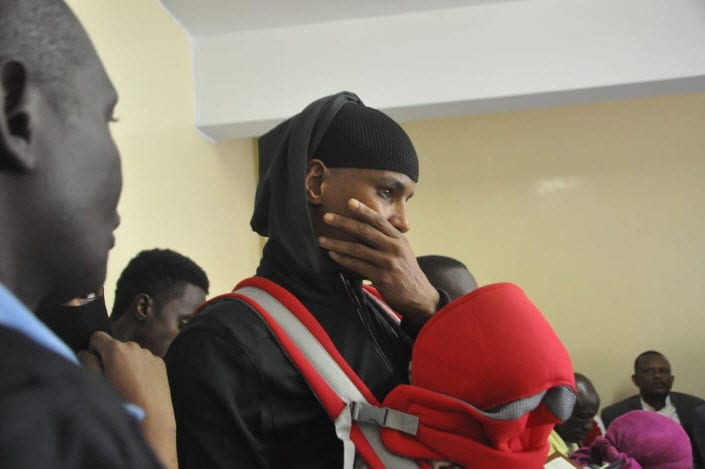 A Somali National has been sentenced to three years in prison without an alternative for fine after he was found guilty of assaulting a Kenyan Politician.

This was after the accused, Jamal Hussein, was found to have caused 30 percent degree injuries that left Wajir Politician Hussein Mohamed permanently disabled.

Further, Magistrate Kimaiyo was keen to note that she relied on medical documents reports and testimonies from both the accused and the complainant side among other evidence produced in court.

Jamal who appeared in court in the company of his alleged young child however sought for bond pending an appeal of the judgement.

In his defence, he told the court that he is a family man and therefore not a flight risk.Jamal further added that he had a Ksh.300,000 cash bail already deposited in court.

Prosecution however objected his appeal saying that he is a foreigner and could easily escape if released.

In their defense, Prosecution noted that the information he was providing now was contradictory because he had previously told court that he has no child and only sought to travel outside country for Surrogacy.

In an earlier application seeking the release of his passport, Jamal had requested the court to release it to enable him travel to the UK to have a kid with his wife through a surrogate, but his application was denied.

“My wife is in the UK and we have been trying to conceive a baby through natural means for years but in vain. We have scheduled a procedure medically to be done in UK and we have to meet the surrogate mother on June 21”, Jamal told court.

The prosecution expressed that Jamal’s application was a delay tactic, coming just when the hearing date got close.

Jamal’s passport had been deposited in court at the beginning of the trial as a condition to ensure he does abscond bail after complainants that he is a flight risk.

Through his lawyer Cohen Amanya, the court however heard that Jamal is a married man and has a young family and a Kenyan wife.

“The accused is a first offender and he has been cooperating with prosecution by attending all court proceedings,” said Amanya.

Amanya added that Jamal is a foreigner and would will still go back to his country upon serving his sentence.

“Jamal is an energetic young man and having him in jail will not serve any purpose,” said Amanya.

In court, Jamal was accompanied by his wife who is Kenyan born and a young child who they said needs parental care.

Jamal has been accused of assaulting Hussein who contested for Wajir Parliamentary seat in the year 2017 outside a Mosque at Eastleigh Nairobi County.

In the case, Jamal who is also an American citizen is charged with causing serious injuries on Hussein’s left leg as well as being in Kenya illegally.

He allegedly committed the offense on September 17, 2017 at Eastleigh 7th street in Kamukunji.

Jamal has since denied the allegations and had been out on a Kenyan surety bond of Ksh.300, 000.