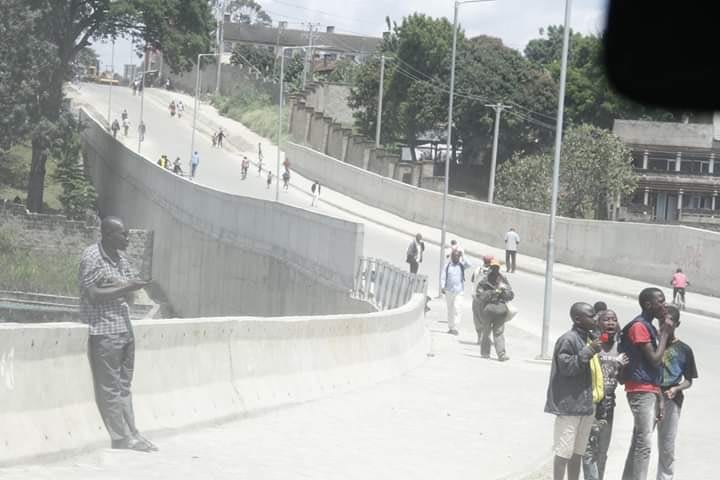 Nairobi Governor Mike Sonko on Thursday launched the link road connecting Eastleigh to Thika during the celebration to mark the World Cities Day.

The European Union (EU) will give Ksh.5 billion grant to enhance the City mobility.

Speaking during the launch of the road, Sonko said the European Union and other development partners have supported the Nairobi administration in the roads and public transport, water and sanitation, health care and socio-economic sectors.

“This project at Muratina Street that we will commission today, funded by the EU, includes bicycle lanes and demonstrates my determination to promote safe and attractive Non-Motorized Transport as a means of reducing reliance on cars for short to medium distance trips,” said Sonko.

Sonko said Nairobi hosts more than one million visitors from all corners of the world every year and around three million Kenyans commute from neighboring counties to work and do business in the city.

He said Nairobi is also the administrative capital of Kenya and the seat of government.

“We also host the two United Nations Headquarters of UNEP and UN-HABITAT. It is therefore not surprising that Nairobi is growing rapidly. The day population is now in excess of 7 million people, a million more than it was 10 years ago,” said Sonko.

Therefore, the Governor said there is an urgent need to fast improve the infrastructure of Nairobi.

“The demands on infrastructure and public services are therefore rising. I assure Nairobians, the many visitors from across the world and the business community, that my administration is committed to meeting the challenges of rapid urbanization,” he said.

Sonko said after they implement the Bus Rapid Transit system and introduce commuter rail services, passengers and commuters should be able to access bus and railway stations safely by foot or by cycling.

“The Nairobi Non-Motorized Transport policy states that all new projects must from now include the provision of safe walkways and cycle lanes,” said Sonko.

Nairobi City County Government is increasing the number of traffic marshals to man the many junctions across the city from where congestion starts to build up.

“However, for a more efficient and free flow of traffic, we also plan to set up an integrated system to manage traffic lights across the whole city, starting from the city centre,” said Sonko.

At the same time, the Nairobi County Government has embarked on the process of building more than 250,000 new affordable houses.

“I thank the President Uhuru Kenyatta for the national government support to the development and regeneration of Nairobi as we continue to do our best to uphold the high standards that the capital city deserves,” he said.

He added, “Nairobi City has a bright future and will grow into a vibrant, modern metropolis. Let us hold join hands to make it the city of choice to invest, work and live in.”