Sonko to Nairobians: Monday’s matatu ban was just a drill, get ready to walk again 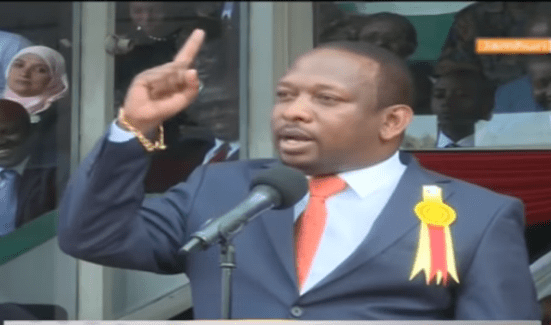 Nairobi Governor Mike Sonko insists that the move to decongest the City by barring matatus from accessing the Central Business District that saw a city-wide transport crisis is just getting started.

Sonko, speaking at a public event attended by President Uhuru Kenyatta said he is still determined to address the issue of congestion in the city even it will cost him a second term.

“Mimi na ndugu yangu rais tumesema afadhali tuache legacy kuliko kupiga siasa ya pesa nane,” he said. (The President and I have said we’d rather leave a legacy than engage in petty politics.)

The Governor warned that Nairobi residents must get used to walking to the city centre so that order is restored.

“Kutembea ni exercise na bado mtatembea tena. Tutachunga masilahi ya wale wamama wako na mimba, the physically challenged and the elderly. It is only one kilometer from railways to the CBD. Kama Governor, sitakubali laziness, mtatembea na mtatembea tena,” he vowed. (Walking is good exercise, we will just look after the pregnant, physically challenged and the elderly… As governor, I will not allow laziness, you will walk and will more some more.)

Sonko was responding to the hue and cry from Nairobians who were forced to walk for kilometers after the governor issued a decree banning matatus from the CBD.

The unpopular move only lasted for 24-hours before Mr. Sonko bowed to public pressure and issued a dawn press conference lifting the ban citing “deep concern on the plight of Nairobi residents as a result of the ban.”

The High Court has since suspended the ban in a ruling that said it was not clear how long the governor’s suspension of the ban would last.