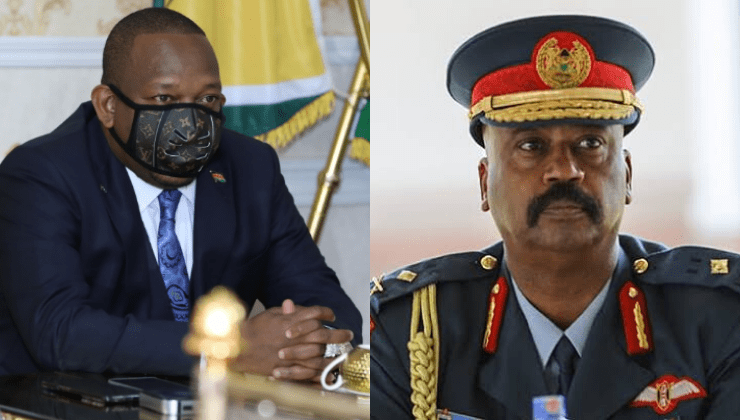 Embattled Nairobi Governor Mike Sonko is taking on President Uhuru Kenyatta, after formally declaring a dispute over the transfer of four critical functions from the County Government to the National Government.

Sonko claims he has been sidelined in the running of Kenya’s capital city, and is contesting the appointment of military officers, led by Major General Abdalla Badi to run Nairobi.

The Governor on February 25th signed away control of the capital city when he transferred four key functions to the National Government and by the stroke of a pen, he was rendered a lame duck county head, with functional and financial power handed to military man Maj-Gen Badi, who was appointed Director-General of Nairobi Metropolitan Services (NMS) by President Uhuru Kenyatta on March 18th.

Sonko, who was also barred from accessing his city hall office as he battles graft charges, now accuses President Kenyatta’s administration of bullying him. He holds the opinion that the Deed of Transfer is fatally flawed from the onset and beyond any redemption.

The four key functions at the heart of the county administration which Sonko surrendered; health services, planning and development services, transport, public works, utilities and ancillary services are allocated more than 75% of the county budget.

The governor also lost the revenue collection function, with the National Government appointing the Kenya Revenue Authority to take charge of the county’s purse.

Having been reduced to an outsider in his own government and with Badi calling the shots, with the full backing of the President, sonko accuses the National Government of staging an unconstitutional and illegal takeover of the capital, in defiance of the provisions on devolution.

That sonko was blindsided by the President and his administration when he signed away control of the city was apparent from the onset. Though he later insisted transfer of the four critical functions was his idea, ostensibly to enhance service delivery in Nairobi, the governor now claims to have been duped and was a stranger to the process leading to the signing of the Deed of Transfer of functions in February.

Sonko had earlier in the day been hard pressed by a city resident, Aloo Denish on social media, on his sobriety and state of mind when he appended his signature on the Deed of Transfer.

The governor in response admitted he was not sober and claimed to have been confused with alcohol moments before the signing ceremony, even daring his critics to institute impeachment proceedings against him at the County Assembly, vowing to resist any further intimidation by the NMS boss.

Other than contesting his diminished stature as governor, Sonko is protesting what he termed militarisation of the city administration, questioning the capacity and qualifications of army generals deployed to head various dockets.

At least 6 military top officers have left the barracks, to assist Major General Badi in running the capital city, in what Sonko terms a silent coup and act of bad faith.

But the process of opting out of the deed of transfer that is to last for a period of 24 months is lengthy, and at the governor’s disadvantage.

Clause 9.2 of the deed provides that the functions can only revert to the county administration by mutual written consent between the two levels of government.

Clause 11.2 requires the two parties to seek amicable solutions to any dispute that may arise, and should the stalemate persist, the matter shall be referred to the National and County Governments Coordinating summit, that is chaired by the President.