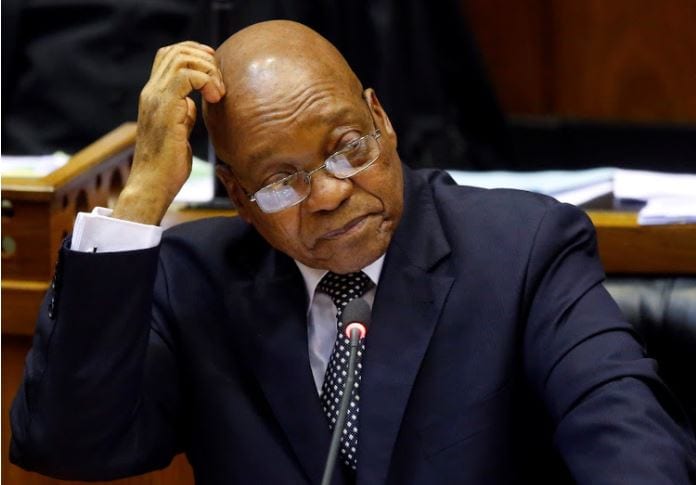 Zuma and French arms company Thales are due in court on May 17 on charges related to a $2 billion arms deal from the 1990s, when he served as deputy president.

Zuma is being tried on 16 charges of racketeering, fraud, corruption and money laundering. He denies wrongdoing in the case. Thales has said it has no knowledge of any transgressions committed by its staff over the awarding of the contracts.

News 24 said the firm representing Zuma, Mabuza Attorneys, had filed a formal withdrawal notice with the Pietermaritzburg High Court on Wednesday morning. The firm had declined to give reasons for the withdrawal, the news agency said.

Mabuza Attorneys, and Zuma’s lawyer Muzi Sikhakhane, did not answer telephone calls and text messages from Reuters seeking confirmation. A spokesman for Zuma also did not respond.

Thales Group, known as Thompson-CSF back in 1999, has consistently denied any wrongdoing. The Paris-based defence and aerospace firm’s spokeswoman Alice Pruvot said it was unsure how the withdrawal of Zuma’s legal team would affect the case.

“Thales only learnt of the withdrawal by Mr Zuma’s legal team, today 21 April 2021. It is in no position to comment on the effect that this may have on the commencement of the trial,” said Pruvot.

“Thales however remains prepared to advance its defence to the charges and is ready to proceed to trial.”

In January the Pietermaritzburg court dismissed a bid by Thales to have the charges, which include racketeering, dropped.

After being struck from the roll in 2008, paving Zuma’s path to the presidency a year later, the 16 charges he now faces were reinstated in March 2018, a month after the ruling African National Congress party kicked him out of office, 12 months before the end of his second term.