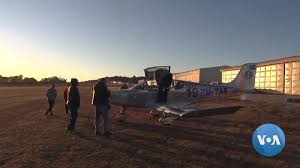 A South African group of teenage pilots who flew a self-assembled aircraft across Africa are back in South Africa after tragedy struck the expedition.

The two experienced adult pilots manning the support airplane accompanying the teens died in an accident in Tanzania. The group left South Africa in June as part of nonprofit U-Dream Global’s inspirational Cape To Cairo crowdfunded project that saw a group of teens build an aircraft and fly it from South Africa to Egypt and back.

Safety has been an extremely high priority since the beginning of the U-Dream Global Cape to Cairo initiative. On the bitterly cold mid-June morning of departure, Des Werner and Werner Froneman made very sure everything was packed. Just over a month and a half later, the two directors of the nonprofit U-Dream Global were killed during the organization’s Cape to Cairo expedition.

Their “Sling 4 plane” reportedly went down shortly after taking off in Tanzania en route to Malawi over the weekend.

Athol Franz, editor and owner of the African Pilot magazine, has been following this initiative ever since the founder of U-Dream Global, 17-year-old Megan Werner, pitched the idea of teens building a plane and flying it from Cape Town to Cairo to the Commercial Aviation Association of South Africa.

“It’s difficult to speculate on what happened, why it happened, other than I understood they had an engine failure. My take of  Des Werner is that he was a highly qualified airline transport pilot. I understand he had something like 15,000 hours under his belt. I was really looking forward to the homecoming party in which we would celebrate the achievements of Megan and her friends. And I’m just so sorry that it’s ended in this tragedy,” Franz said.

“It’s from packing boy to flight management, to photographer, to videographer… And somewhere along the line I have to fly the plane as well.,” Froneman said.

Officially, Froneman was the U-Dream Global project director and coach, but he wore many more hats during the expedition. In June, Froneman said he signed up for the mission because the initiative changes lives, but the journey was not always easy.

“I was too lazy to study biology. And then my imagination started going. And then I was like, OK, let’s fly a plane across Africa….”

U-Dream founder and teen pilot Megan Werner is also Des Werner’s daughter. She initiated the project to show other young people that dreams can come true.

At the maiden flight event of the self-assembled U-Dream Global plane in South Africa, shortly before the journey to Egypt started, Belinda Werner and her husband, Des, talked about their expectations for the trip.

“I think any mom is concerned — or any mom and wife is concerned…But you know, me being in aviation, as well and being exposed to all sides of aviation, I think I’m happy that they’ve chosen this industry to get the message out there that anything is possible. Because that is what we belief as a family, as well,” Belinda Werner said.