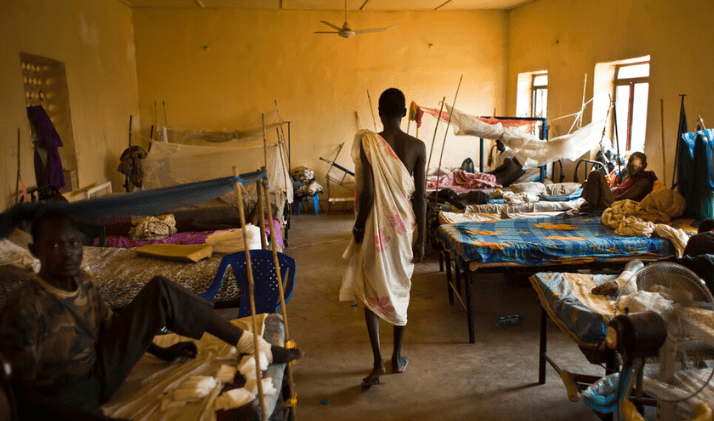 Health officials say these shortfalls are largely due to insufficient government funding that has persisted since the nation’s 2005 Comprehensive Peace Agreement. Dr. Bol Deng, secretary-general of the South Sudan Doctors’ Union, said the situation was made worse by continued budget cuts, amplified by the drop in the nation’s health care allocation in fiscal year 2019-20 to 525 million South Sudanese pounds from 1.7 billion pounds the year before.

“This is too small even to cover the components of quality health services that we need,” Deng told South Sudan in Focus. “What you see now is the part of this health financing covered by NGOs (nongovernmental organizations).” NGOs cover a significant portion of health care in South Sudan.

Deng says this continued underfunding has demoralized health workers and caused deteriorating working conditions at hospitals and clinics across the country.

He added that the government was also not listening to calls by the Doctors’ Union for better pay and working conditions.

The government funding shortfalls have put much of the financial burden on local and international NGOs, which also have thin budgets.

In addition, health workers say they are hindered by violence between the government and rebel forces, conflict between ethnic communities, and the lawlessness caused by cattle rustling.

This instability affects Anita Peter, a health worker in Central Equatoria State’s Yei County. “You want to deliver the services, but you think of your life — what should I do with my life?” she said. “Now I am sacrificing my life. If you are just on the road, you will just give your life to God.”

International Committee of the Red Cross spokesperson Lucien Christen told VOA that attacks against medical workers and facilities had caused a “dramatic situation” in South Sudan. Such attacks have been on the rise in the past couple of months, as at least two aid workers were killed in May alone. They are threatened, beaten and tortured frequently.

As hundreds of people are killed and injured each year throughout the country, authorities and communities need to work together to build key infrastructure to ensure essential services are available, Christen said. “Only 40% of health care centers in South Sudan remain functional, according to the U.N.,” he added.

People who have been wounded and others affected by violence “will continue to need extensive physical and psychosocial support as they adjust to the life-changing impact of living with a disability,” Christen told VOA.

“Humanitarian organizations like the International Committee of the Red Cross, together with authorities, have a critical role to play in building the resilience and capability of communities to face these shocks,” he added.

Accessing health care is also a hurdle. Many people walk several hours or even days to reach a medical practitioner, according to Christen.

“Across South Sudan, vulnerable persons continue to die from curable diseases or wounds, as access to health care remains very limited. Nine percent of children die before the age of 5,” Christen told South Sudan in Focus.

World Bank data from 2019 for children under 5 shows South Sudan registered 96 deaths per every 1,000 live births, putting the nation in the top seven countries with the highest infant mortality rates in the world.

Joseph Gama, of Health Link South Sudan, a humanitarian organization, sees how the lack of proper infrastructure in the countryside makes it difficult to reach and transport patients.

“This is happening, (because of) the poor road conditions and lack of ambulance services in some remote areas. Especially mothers die due to such delays. They cannot reach facilities within the required time,” he said.

Gama says the referral system needs to be improved so patients can quickly see the specialists needed to treat them. “Everywhere in the country, there is difficulty in referrals.”

Meanwhile, many in South Sudan must access and obtain medical care themselves.

David Ladu, 38, of Yambio had fractured his hand three months ago, and after initial treatment in Yambio Hospital, he was transferred to a facility in the capital, Juba. Ladu said he had to pay 30,000 South Sudanese pounds from his own pocket to get himself and a caretaker to the Juba hospital, 355 kilometers away. That amount of money would be about six months’ salary for a teacher or a nurse.

He also laments the massive personal costs for drugs and treatment.

“My family gets contributions from relatives, friends and charitable people who come to visit me here. If alone, I could not manage the medical bills.”

Health Ministry Undersecretary Dr. Mayen Machut Achiek did not respond to repeated calls and text messages requesting the government’s view of the challenges facing health care workers as well as the government’s plans to improve service delivery in the health sector.