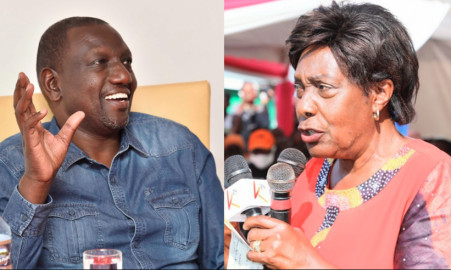 The governor criticized Ruto saying he had become perpetual in his tendency of using vulgar language as he drummed up support for his bottom-up agenda around the country ahead of the August presidential elections.

Ngilu cited DP Ruto's Thursday tour of Machakos where he reportedly hit out at Kalonzo as one such instance.

“I would like to ask William Samoei Ruto to really desist from the vulgar language that he has been using against leaders,” Ngilu said on Friday while addressing the media.

“Let him understand that he will not be allowed when he comes to this region (Ukambani) to ever say one word; and we leaders of this community region want to warn him.”

The Kitui County boss further threw a jab at the DP’s personality saying he should understand his position in the country’s politics and respect leaders who over time have preserved their integrity.

Ngilu compared Ruto’s journey in politics as inferior to that of the Wiper Party leader stating that Kalonzo has a track record that the United Democratic Alliance (UDA) frontman cannot fathom.

“The difference between Stephen Kalonzo Musyoka and William Ruto is that one is very honest. Kalonzo is a very honest, reliable and trustworthy person who has worked hard to bring peace to this country. And, therefore, when you compare him and a person like Ruto is like day and night,” she stated.

Consequently, Governor Ngilu slammed Ruto’s efforts to woo Ukambani as of little impact which would turn out to be futile stating that the region was rallied behind Orange Democratic Movement (ODM) leader Raila Odinga.

“We can tell him for sure, he has no support in this community, and he will not get any support. He can be sure about that,” Ngilu assured.

During his Thursday itinerary, where DP Ruto pitched camp in Machakos, he poked fun at  Kalonzo saying that he had lost his hair for consistently supporting Odinga.