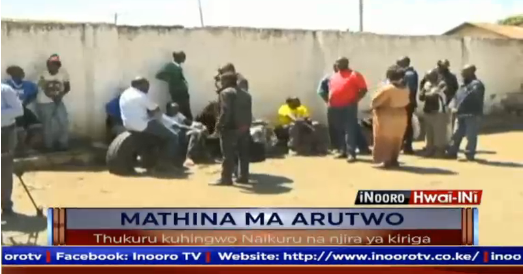 Fifteen students of ACK St Bartholomew School in Voi spend the night in the cold after they were among 50 others sent back home by the school principal for arriving to school late on opening day.

The 15 were seen camping along the streets in Voi Town after they were unable to raise the fares back home as some of them came from as far as Mwatate and Mombasa, while the other 35 were able to go back home.

Speaking to the Citizen, the students said they were forced to walk for more than three kilometers from the school to Voi Town at night when their principal denied them access after declining to listen to their explanations.

“We were walking in darkness until we reached Voi Town and found a place in the street where we camped outside,” one of the students said, claiming that some of them were only ten minutes late.

Speaking on phone, Voi District Education Officer Kennedy Machora said that officials of the Ministry of Education in the area were investigating the matter.

Efforts to reach the principal were futile as calls went unanswered.

Meanwhile, parents of Paramount Primary and Secondary Schools stormed the school premises appealing for justice after the school was closed after a short notice.

The agitated parents claimed they had only received a text message informing them that the school would not re-open come January.

“We received message from the management on 14th December 2015 last informing us that the school will be closed by January,” said one of the parents.

“The school did not have any plans for the transfer of the students, especially those set to sit for the Kenya Certificate of Secondary Education exams,” said Peter Gitonga, a parent whose son is in form four.

Gitonga said the school that was started more than ten years ago had not given the parents any hint on the impending closure, adding that the students might end up performing poorly.

The parents are now calling upon the Ministry of Education to intervene saying some of the students were joining form four and it was too late to be admitted in different schools.