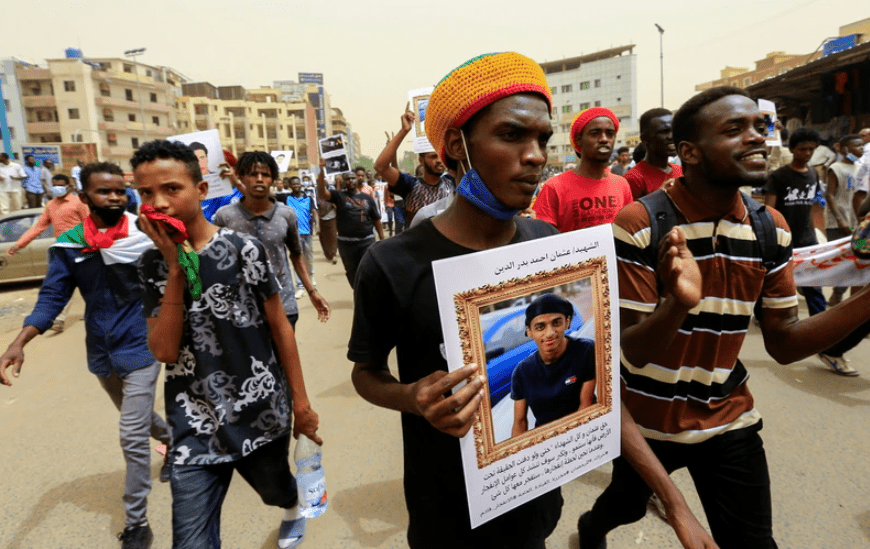 Thousands of protesters in Sudan’s capital demanded justice from the government this week over a 2019 massacre in Khartoum in which more than 100 people died.

The protesters Thursday called for the government to hold the Rapid Support Forces, a security unit, accountable for violently suppressing sit-in protests two years ago.

On Wednesday night, Sudan’s military began restricting access to the area surrounding the military headquarters where the killings took place.

In a press release addressing the anniversary, the prime minister of Sudan, Abdalla Hamdok, described what he called a complicated relationship with the country’s various security agencies, which the constitution says are under the authority of his military counterpart.

Political analyst Shawgi Abdulazeem said the absence of justice in the sit-in dispersal was increasing tension.

Activists have shared videos from the June 2019 attack that show heavily armed security convoys near the protester encampments.

Mohamed said demands of the massacre victims’ relatives remained linked with political agendas. He noted that their protests were aimed at the Rapid Support Forces alone, not other uniformed forces such as the military and other security forces that should also be under investigation.

The controversial Rapid Support Forces surfaced during the Darfur war in 2003 under former dictator Omar al-Bashir. The forces grew larger over the years, participating in the Yemen war on behalf of Saudi Arabia, and they were allegedly involved in Libya’s war.

After Bashir was ousted from Sudan in 2019, the top leaders of Rapid Support Forces reached a power-sharing agreement with military and civilian lawmakers.

In March 2021, Human Rights Watch alleged that the Rapid Support Forces had committed many abuses, and it urged the transitional government to address the unit’s growing power.

The United States also called on Sudan to bring all the militias and armed entities into one army controlled by a civilian-led government.

Meanwhile, the Sudanese public prosecutor resigned in May without explanation.

Sudan’s prime minister has asked the official tasked with investigating the 2019 killings to set a deadline for releasing the findings. Protesters say they will escalate their rallies if the government further delays the results of the investigation.