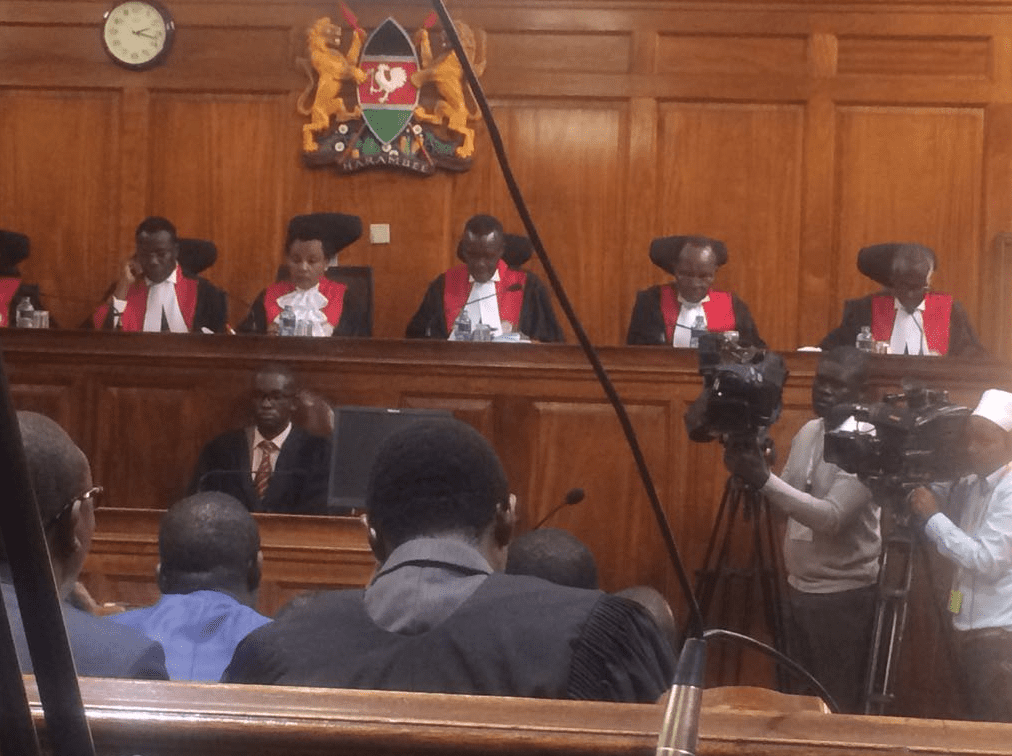 The Supreme Court on Monday delivered its detailed judgement on the October 26 repeat presidential petition.

These are five reasons why the election petitions, filed by Njonjo Mue and others, and consolidated with the one filed by Harun Mwau, were dismissed.

1. There was no need for fresh nominations

The apex court found that the nominations held for the August 8 General Elections were still valid during the October 26 presidential race.

“We affirm that all the candidates in the August 8 election were validly nominated and it was proper for the Independent Electoral and Boundaries Commission (IEBC) to have included them on the ballot paper as presidential candidates,” Justice Lenaola stated.

2. Raila Odinga’s withdrawal could not occasion a cancellation

Whereas the withdrawal of NASA’s Raila Odinga was ruled to have been legally valid, the court found that the action did not suffice to invalidate the election.

“The NASA candidate withdrew publicly and in writing to the first respondent (IEBC Chair Wafula Chebukati). This was effective in law.”

However, this withdrawal was found not to have any legal effect on the repeat poll as it was not within the statutory requirements occasioning an invalidation.

“Withdrawal could not, in law have occasioned a cancellation. The law provides for withdrawal within three days of nominations. The said regulation is not applicable to the situation at hand,” said Justice Smokin Wanjala.

3. Violence could not invalidate an election

The court found that violence of any form constitutes a travesty of justice and of rule of law.

The court however stated that its mandate could not allow it to legitimise violence, as any party willing to seek invalidation of any constitutional process would have an unjust legal justification.

“Those who intentionally instigate violence should not plead violence as a means of nullification,” read Justice Njoki.

On the issue of intimidation by the president, the court dismissed the allegations.

“While being alive to the fact that the 3rd respondent has on various occasions expressed his dissatisfaction with the (September 1) judgement delivered by this court, no judge of this court was intimidated by the choice of words by the 3rd respondent,” said Justice Wanjala.

4. Illegalities and irregularities did not affect the outcome of the election

The Supreme Court ruled that the burden of proof placed on the petitioners to show that illegalities and irregularities conducted during the election during the October 26 presidential election had not been met.

“The irregularities and illegalities must be of such a profound nature as to affect the actual result or integrity of the election for a court to nullify. The petitioners did not discharge the burden of proof required,” Justice Ojwang read.

5. Threshold for legitimacy and credibility was met

The issue of low voter turnout was dismissed as the Supreme Court Justices held that the most important factor to be considered was whether the constitutional provisions were followed in the conducting of the repeat poll.

“An election cannot be tainted solely on voter turnout. Repeat elections and by elections are occasioned by voter fatigue and general apathy. This gives no legal basis for invalidating. The election was credible and met the constitutional threshold,” said CJ Maraga.

“The ultimate yardstick of determining a winner in the presidential election as provided by Article 138 (4) was in our consideration met, hence the election was free and fair.”