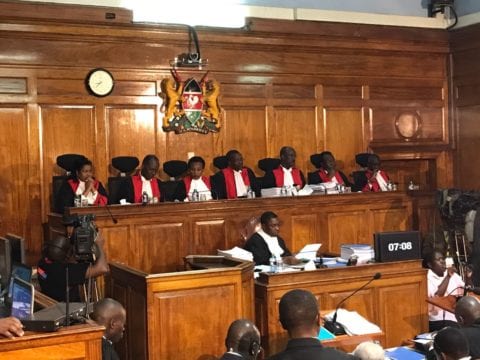 The use of technology in the management of elections in the country is a matter that has engaged the minds of Kenyans for a long time.
One can trace the introduction of electronic means of voter registration, voting and transmission of election results to the events of 2007/08 when violence nearly plunged the country into an abyss following a dispute over the outcome of the contest between President Mwai Kibaki and Raila Odinga,
Constituency returning officers were also required to physically travel to Nairobi to deliver Forms 16A (as the form with the collated tally was then called) but some switched off their forms for days on end or submitted photocopies or tampered ones.
The Johann Kriegler commission, which was formed to probe the electoral process, found out that there were massive irregularities on both sides rendering the election a farce. Part of it included stuffing of ballot boxes and suppression or inflation of votes in significant areas.
It recommended the introduction of technology that would register and identify voters and transmit results in a fast and ascertainable manner.
In 2013, some voter identification kits and the results transmission system failed leading to another dispute this time pitting President Uhuru Kenyatta and Raila.
Further reforms saw a new system put in place and this has come to be known as the Kenya Integrated Elections Management System (Kiems). It encompasses various processes involvement in elections management including voter registration and identification, political party registration, candidates registration and results transmission.
Though the system almost perfectly worked in terms of voter identification, the National Super Alliance (Nasa), on whose ticket Raila was vying for the presidency, claimed it was hacked and the results of the presidential election manipulated to favour Jubilee Party’s Uhuru.
It is on the basis of this that majority of the Supreme Court judges led by Chief Justice David Maraga nullified President Uhuru’s win in the August 8 presidential election especially after the Independent Electoral and Boundaries Commission (IEBC) failed to opens its servers and provide ICT logs for scrutiny as ordered by the Supreme Court.
“IEBC’s contumacious disobedience of this Court’s Order of 28th August, 2017 in critical areas leaves us with no option but to accept the petitioners’ claims that either IEBC’s IT system was infiltrated and compromised and the data therein interfered with or IEBC’s officials themselves interfered with the data or simply refused to accept that it had bungled the whole transmission system and were unable to verify the data,” said Lady Justice Philemona Mwilu.
However, in their dissenting rulings Justice Jackton Ojwang and Lady Justice Njoki Ndung’u downplayed the significance of the failure of the results transmission, saying it should not have been used to supplant the will of the people.
She noted that unlike countries such as India and the United States, Kenya’s electoral system is both manual and physical, noting that though the law lays emphasis on the use of technology it allows for a complementary system, which is manual, which the electoral agency can resort to in the event of system failure.
In addition, she pointed out that voter registration, casting and counting of ballots and well as data entry into the Kiems kits are all manual processes and only voter identification and transmission of results are electronic.
But even voter identification, one has to physically present himself for scrutiny before being given ballots to go and cast.
“Kenya‘s electoral process cannot therefore be said to be purely electronic. It comprises of both manual and electronic components. It is a rather ugly grouchy and reluctant mongrel of two very distinct processes. In fact, it is a largely manual system,” she ruled.
Lady Justice Ndung’u dwelt on the issue in length before concluding that what is important are the results declared at the constituency, which in line with the Court of Appeal ruling in the Maina Kiai case are final and not subject to alteration at the National Tallying Centre.
She noted that the will of the people is recorded in verifiable ballots and other election material and the results declared available, ascertainable, unchallenged and proper statutory instruments of declaration.
In addition, she disagreed with the petitioners’ application that results from 11,000 polling stations which were out of 3G and 4G network be excluded, saying it would be an affront to the Constitution and the right to franchise.
In their majority ruling, Justice Maraga, Lady Justice Mwilu, Justice Smokin Wanjala and Justice Isaac Lenaola also agreed that the process went on smoothly only for the “system to thereafter went opaquely awry.”
While in the end the majority had they way, the issues raised by the dissenting judges must provoke a fresh debate on how to ensure technology does not disefranchise the people.
Indeed, the law on elections technology envisaged progressive deployment and not a sudden changeover.
The timelines within which the Supreme Court should hear and determine petitions also needs to be extended to at least 30 days to allow for processes such as a recount of votes to determine a winner. This would save the country billions of shillings that would go into holding a fresh election in the event the outcome is voided.