Supreme Court verdict: What to expect 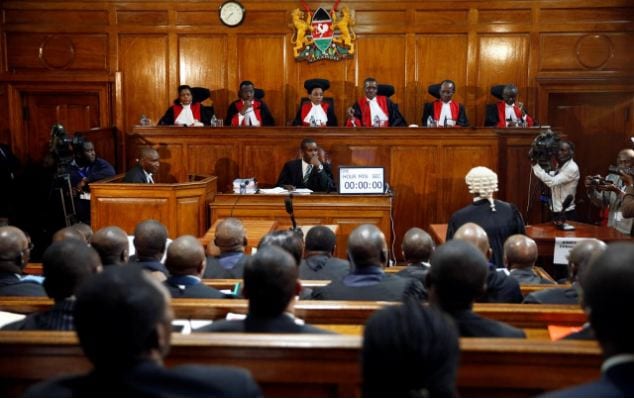 The Supreme Court is today morning expected to deliver its verdict on the election petition challenging the re-election of President Uhuru Kenyatta.

Among the issues that the court is expected to determine is whether the election was held in accordance with the electoral laws and the directions issued by the apex court on the 1st of September.

The six-judge bench will determine whether failure by the IEBC to conduct fresh nominations, withdrawal by National Super Alliance (NASA) flag bearer Raila Odinga and failure by voters in 25 constituencies to take part in the election are sufficient grounds to nullify the October 26 vote.

The ruling could go either of three broad ways. First, the Supreme Court judges could invalidate the presidential polls and order another election within 60 days.

Secondly, the judges could throw out the petition, effectively upholding President Uhuru Kenyatta’s victory, this culminating in the swearing in of President Kenyatta for a second term on Tuesday the 28th of November.

Article 141 on the Assumption of Office holds the swearing in would be on the Tuesday after seven days of the verdict.

Lastly, the Justice David Maraga led bench could uphold the presidential election victory but note concerns on any anomalies presented during evidence submission, if not enough to completely nullify the poll results.

On September 1st, the Supreme Court judges voted 4-2 to nullify the presidential election results. In the absence of Justice Mohammed Ibrahim who is unwell, should there be a tie, it would mean status quo remains and the petition is thrown out.

The petitioners who include former Kilome MP Harun Mwau and two activists – Njonjo Mue and Khelef Khalifa – filed the petition saying that election did not meet the threshold set by the Constitution.

Through lawyer Julie Soweto, the petitioners asked the Supreme Court judges to annul the election on grounds that nominations were not done prior to the elections.

However, President Uhuru Kenyatta’s lawyers led by Fred Ngatia defended his re-election arguing that there was no need for the electoral commission to conduct fresh nominations after the nullification of the August 8 presidential election.

In its submission, the Independent Electoral and Boundaries Commission (IEBC) stated that the fresh presidential election was unique and for which there was no requirement for fresh nominations.

Ngatia said that there is not a single constitutional or statutory provision, which requires that fresh nominations be conducted during a fresh election under Article 140 (3) of the Constitution.

The respondents – Kenyatta, IEBC and its chairperson Wafula Chebukati – argued that the fresh election was done in accordance with the law.

They urged the Supreme Court to dismiss the election petition and avoid a constitutional crisis.

The respondents also blamed the opposition for intimidating and threatening voters in the 25 constituencies where the elections were cancelled.