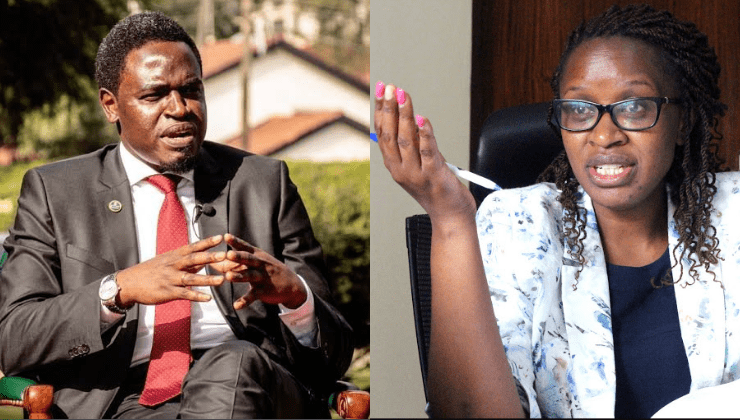 The supremacy battle at the Law Society of Kenya (LSK) on Monday took a legal turn after suspended CEO Mercy Wambua recorded a statement with the police alleging that she was assaulted by the society President Nelson Havi during a meeting at their Gitanga road offices.

Havi dismissed the claims saying Wambua forced her way into the boardroom while they were having a meeting with the intention of recording the proceedings.

Wambua, in the company of her lawyer Steve Ogolla, recorded a statement at the Muthangari Police Station stating that Havi allegedly accosted her in the boardroom where she was to have a meeting.

“When she hesitated, because she was already seated in a meeting, Havi then charged towards her attempting to slap her, which she dodged, and then Havi slammed her laptop effectively crashing her fingers.”

Wambua stated: “I feel harassed and bullied, my hand is painful as we speak and my finger can’t actually stretch…and this is not the first time this is happening, even on Friday he attempted to assault me.”

Wambua claims that Havi has affected operations at the LSK offices for the last one week, accusing him of harassing the staff who he perceives are not loyal to him.

The embattled LSK CEO is now requesting for security from the police.

“We urge the OCS Muthangari Police Station to assign at least two police officers to man that place until the situation has been addressed or comprehensively handled,” stated Ogolla.

“She sought to interrupt that meeting, whereafter we asked her to leave and when she insisted to continue with an online meeting, I don’t know with whom, I closed her laptop, opened the door, whereafter she stood up and went,” said the LSK President.

Havi, who said he is yet to be summoned by the police, insists that Wambua is a trespasser at LSK offices as a decision had been made during a special general meeting on June 26 to send her on compulsory leave with full pay.

Havi, in a later tweet posted on Monday night, accused the LSK CEO of shielding two of his former predecessors from liability over the alleged plunder of hundreds of millions of the society’s funds.

Theft is theft! It is no less if committed by a woman. Mercy Wambua is shielding her principals, two immediate former Presidents of LSK from liability for plunder of hundreds of millions. Falsely shouting through paid journalists that ‘Nelson Havi assaulted me’ won’t help. ^POLSK