Swazuri, 12 others plead not guilty to fraud, abuse of office charges 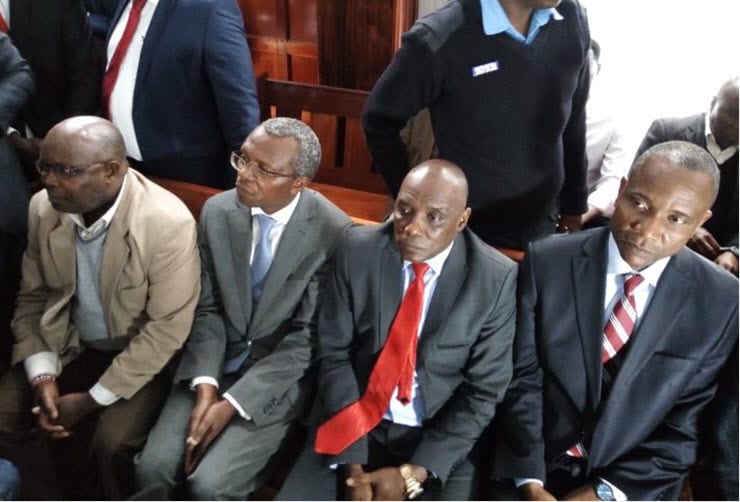 Swazuri who was before the anti-corruption court pleaded not guilty to charges among them conspiring to commit corruption which the prosecution claims led to the loss of public funds belonging to Kenya Railway Corporation in the sum of Ksh.222,375,000.

The NLC boss faced five other counts of abuse of office and an alternative charge of breach of trust while Kenya Railways MD Atanas Maina faced two counts of conspiracy to defraud and breach of trust.

Defense lawyer Prof. Tom Ojienda asked for bail saying the accused persons “are not a threat to national security.”

“These are victims of a process and this is a matter that has a civil perspective ,” said Ojienda, adding that the charges against the accused persons were not serious.

He further submitted that no compelling reasons had been advanced by the prosecution to show that any of the accused persons was likely to intercede with witnesses.

The defense also submitted that the accused persons were brought to court beyond the 24 hours requirement.

“They have spent 50 hours in custody before coming to court,” added Ojienda.

The prosecution however opposed the bail application stating that the offences against the accused persons were crimes against humanity.

“The acts of accused persons put together was done in a systematic way, we are opposed to their release on bail,” said the prosecution.

The investigating officer, Alfred Mwendwa, in his affidavit said there were compelling reasons stating that corruption is a very serious offense.

Prosecution further claimed that Swazuri does not respect public institutions and the rule of law and is, therefore not a person fit to be released on bail.