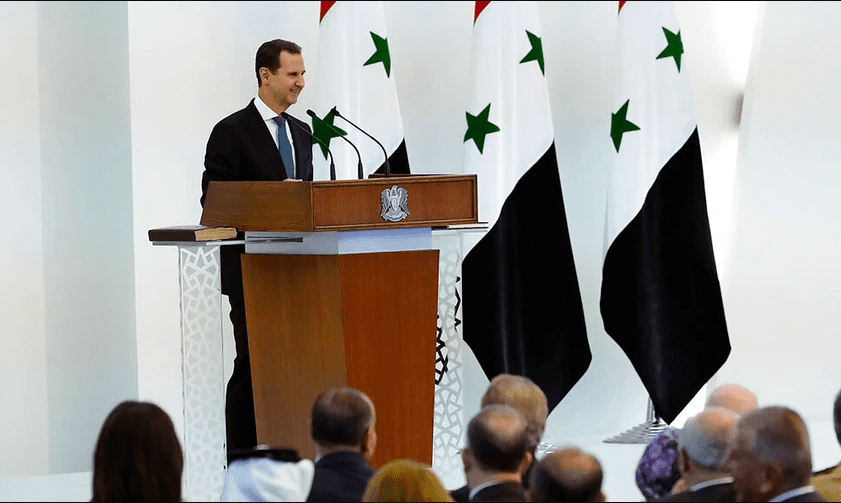 Syrian President Bashar al-Assad, who was formally re-elected to a fourth seven-year term in May despite allegations of fraud by many Western countries, took the oath of office Saturday in Damascus.

A military band welcomed Assad as he walked down a red carpet before entering the palace to be sworn in and speak to a large crowd of officials and dignitaries.

Two army officers carried copies of the Quran and Syria’s constitution, on which Assad took the oath.

Khattar Abou Diab, who teaches political science at the University of Paris, told VOA he thought Assad was vastly overestimating the value of Syrian assets held in Lebanon, and that the Lebanese government, under pressure from Hezbollah, has been sending subsidized goods, including gasoline, to support the Syrian economy.

Diab said Lebanon has been supporting Syria economically since 2016 with subsidized gasoline and food staples, so Assad is wrong to claim that Lebanon is the cause of Syria’s economic woes. Syria, he argued, has been run badly and various mafia figures, including Assad’s cousin and a clique close to his wife, control the economy.

Joshua Landis, who heads the Middle East department at the University of Oklahoma, tells VOA that while Assad’s focus on Lebanon’s bankruptcy “is an attempt to shift responsibility for the terrible conditions in Syria,” it is also true that “Lebanon’s bankruptcy devastated Syrians as well as Lebanese, “with the Syrian currency falling from 500 pounds to the dollar to 4000 to the dollar in tandem with the collapse of the Lebanese pound.”

“Syria,” he adds, “had an extremely primitive banking system (which) no one trusted, so Syrians kept their savings in Lebanese banks.” “When Lebanon froze those accounts,” he stresses, “Syrians lost what money they had squirrelled away.”

Members of Assad’s official Baath political party and other supporters of his regime told state TV that U.S. government sanctions on Syria and Turkish and Kurdish control over portions of the country had aggravated the country’s economic crisis.

Paul Sullivan, a Washington-based Middle East analyst, told VOA that he thought the Assad regime “destroyed the Syrian economy with F-minus economic policies and then destroyed the country with a massacre of its people and its economy.” Syria’s frozen assets, he said, amounted to “a lot less than what Assad and his cronies have stolen from the people.”

An official government tally said Assad won over 95% of the vote in the May 26 election in parts of the country under government control. Sullivan called the 95% figure “pure dictatorial manipulation.”

Assad contended that neighboring Turkey, which still controls portions of the country, “was trying to impose its will on the Syrian people, but its goals were foiled by the election results.”

Diab pointed out that Assad’s supporters used to chant “Assad or we burn the country,” in the days after conflict broke out in 2011. “Assad finally won the conflict,” he said, “and the country was burned, and now he is ruling over a pile of smoking ruins.”