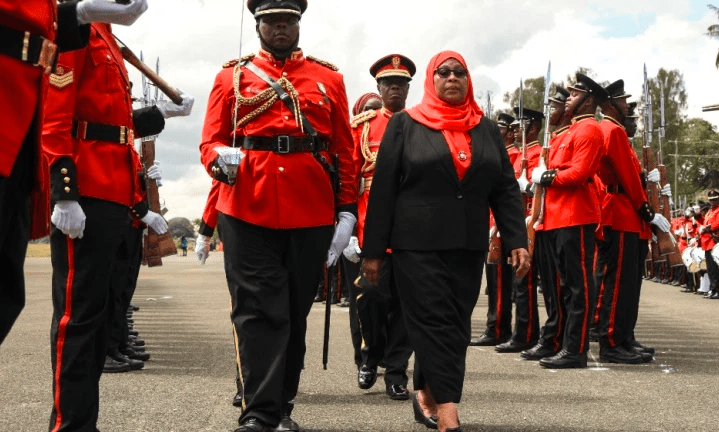 Her official plane touched down at the Jomo Kenyatta International Airport (JKIA) at around 9.40am.

President Suluhu’s first stop will be at State House where she will inspect a guard of honour and receive a 21-gun salute before proceeding for bilateral meetings and consultations. Later that evening, an official State dinner in her honour will take place at the same venue.

On Wednesday, President Suluhu is expected to address a joint sitting of Parliament but is also scheduled to hold consultations at a business forum for Tanzanian and Kenyan business community and will also address a gathering of executive women in business.

The Ministry of Foreign Affairs has highlighted the private sector, arts, culture, wildlife and tourism as possible areas of greater collaboration between the two nations.

Suluhu’s visit comes on the back of an official invite from President Uhuru Kenyatta delivered by Sports CS Amb. Amina Mohamed on April 10, 2021 in Tanzania. The main aim would be to mend frosty relations between the two countries which had escalated under previous governments, with a focus on the tariff wars between the two countries that had slowed down trade over the years.

Kenya is the biggest investor in Tanzania while Tanzanian exports to Kenya have been on an upward trajectory in the last 10 years.

Meanwhile, at the Kenya-Tanzania, Namanga border traders and transporters are optimistic that better days lie ahead once the spats over trade barriers and the movement of goods, people and labour under the EAC common market protocol are resolved.

Samia Suluhu, Africa’s only sitting female president at the moment, took over from John Pombe Magufuli following his death in March, and her visit comes nearly five years since her predecessor made a similar visit.