Tears and guilt grip survivors at US school shooting vigils 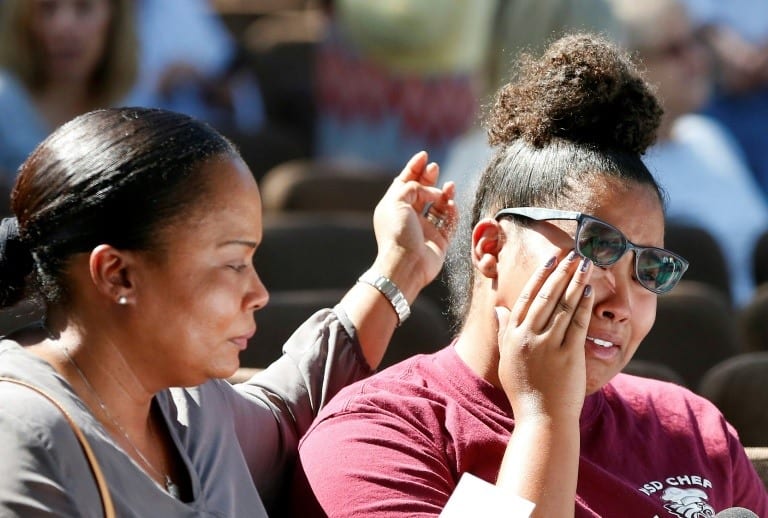 Florida teen Stacey Sayers says she is on an emotional roller coaster happy to have survived the carnage at her high school, but overwhelmed by what her classmates have lost.

The 15-year-old was one of thousands who honored the victims in a series of vigils on Thursday, the day after the deadly shooting rampage at Marjory Stoneman Douglas High School.

“I feel so bad for those kids who died,” Sayers told AFP as she gathered with hundreds of people for an afternoon ceremony in a public park in Parkland, north of Miami. Thousands more turned out for an evening candlelight vigil.

“They couldn’t get up this morning and do their makeup like I got to do and just fall in love and have children they can’t do any of that,” she said.

“I just feel so guilty and so lucky at the same time.”

On Wednesday, 19-year-old Nikolas Cruz  who had been expelled from the school opened fire, spraying multiple classrooms with bullets before ditching his tactical gear and slipping out of the complex unnoticed.

He was arrested shortly thereafter and has been charged with 17 counts of premeditated murder.

Throughout the day and into the evening, mourners cried and consoled one another as they tried to make sense of the bloodshed. The devastation was palpable.

“No parent should bury their child.”

‘Always marked by this now’

At the park, 17 illuminated angels were displayed in memory of the victims, among them the school’s football coach, athletics director and a beloved geography teacher.

Silver balloons were released during the day to honor the dead.

“It’s just a lot of emotion. I’ve seen a lot of my friends from Douglas school and they’re crying — it’s a lot.”

At lunchtime, hundreds attended a church service in the neighboring city of Coral Springs.

A woman’s sobs broke the silence, as four others tried to comfort her. Florida Governor Rick Scott did a reading from the Bible.

“It’s always somewhere else. But it has to be in someone’s community and unfortunately it’s happened here. We will always be marked by this now,” Baptist pastor Eddie Bevill told AFP.

“When you hear the names Parkland, Douglas High School, Coral Springs, everyone will say oh, it’s that place.”

For many, the fact that Cruz — a troubled teen who officials said had lost both of his parents and sought mental health counseling in the past — was able to legally buy a gun from a local store.

“It’s illogical that the law says a minor can’t have a drink, but can buy a gun,” said Mavy Rubiano, the 47-year-old mother of a student who survived the shooting.

Bringing some relief to the desperate situation, however, were therapy dogs, trained and deployed by US charities in the aftermath of tragedies.

At Thursday’s church service, children and adults alike played with one golden retriever.

“Everybody loves dogs. It’s very difficult, even in times of great sadness, not to feel better when you pet a dog,” said Sharon Flaherty of Lutheran Church Charities, who traveled from Chicago with her dog, Jacob, to provide assistance.