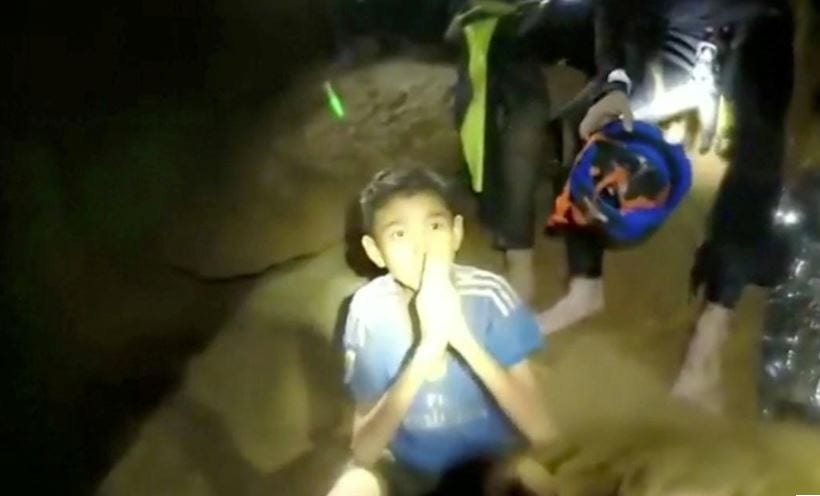 A former Thai Navy diver who had volunteered to help rescue 12 boys and their coach from a cave in northern Thailand has died, according to government officials.

The command center is located two kilometers (1.2 miles) inside the cave, where the young soccer team and their coach have been trapped for almost two weeks. 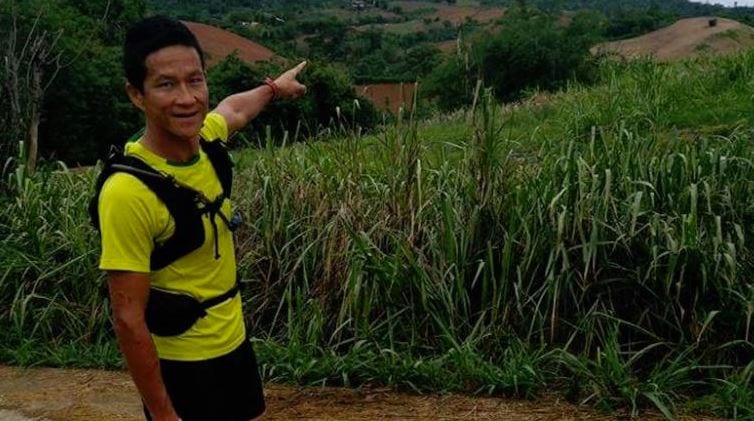 Former Thai Navy SEAL Saman Kunan, who died in the Tham Luang Nang Non cave complex during a massive rescue operation to save 12 boys and their soccer coach.

Kunan, 38, was returning from delivering oxygen tanks to the cavern where the boys are when he ran out of air while underwater.

“Diving is always full of risks,” Navy SEAL chief Rear Adm. Aphakorn Yookongkaew said. “He may have passed out,” causing him to drown, “but we have to wait for the autopsy,” he added.

A military aircraft will carry Kunan’s body from Chiang Rai to Satthahip Navy Base Friday evening. A funeral service will take place there, and then at his home town in the province of Roi Et, northern Thailand. 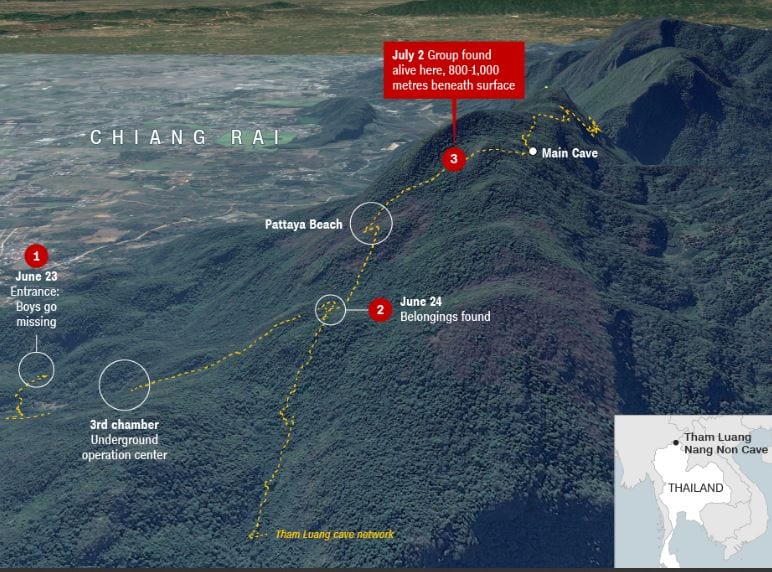 Volunteer diver Mikko Paasi said that the mood at the camp had changed since the rescue team learned of Kunan’s death.

“Definitely you can feel it that it has an effect, but we’re moving on. Everyone is a professional so we’re trying to put it away and avoid it happening again,” said the Finn, who is a long-term resident of Thailand.

“Everybody is focusing on getting these boys out — keeping them alive or getting them out.”

A huge operation is underway at the Tham Luang Nang Non cave complex, where dozens of Thai Navy SEALs and international experts are attempting to find a way to get the boys out.

The members of the Wild Boar soccer team were reported missing on June 23 when they didn’t return from an outing after soccer practice. They entered the cave during fine weather but became trapped when a sudden downpour flooded the narrow tunnels.

The 12 boys and their coach were found deep inside the cave by two British cave divers on Monday, perched on a rock slab above flood waters, after nine days without food or fresh water.

Since then, rescuers have been examining ways to bring the boys out, including fitting them with full-face oxygen masks and accompanying them on a long, dangerous swim through the tunnels.

However, the death of an experienced diver in the cave system underlines the inherent risks in attempting to move the boys, who are physically weak after days without food.

It takes even the most experienced divers up to five hours to swim through jagged, narrow channels from where the boys are to safety outside. 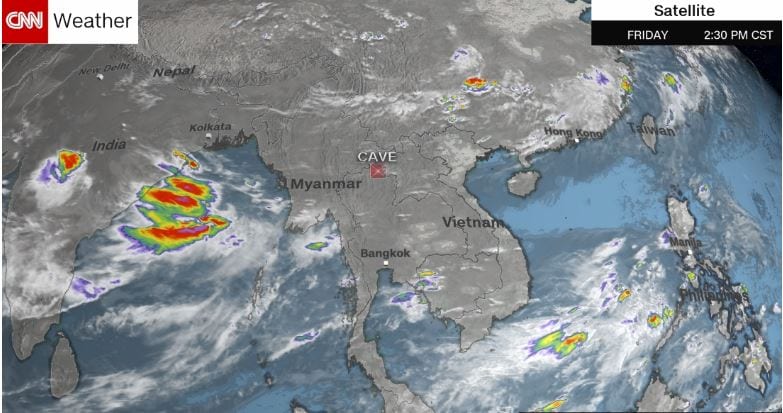 Rescue teams have been pumping millions of liters of water from the cave in an attempt to lower water levels to the extent that the boys can simply walk out.

However more rain is forecast this weekend, putting pressure on rescuers to act soon or have to contend with even higher water levels inside the cramped chambers.

Thailand’s monsoon season runs from July to October and, while the past few days have been relatively dry, the long term forecast is rain for months.

The rescue is being further complicated by the lack of oxygen inside the tunnels, as more rescuers enter to carry supplies to the boys, and work to widen tunnels. 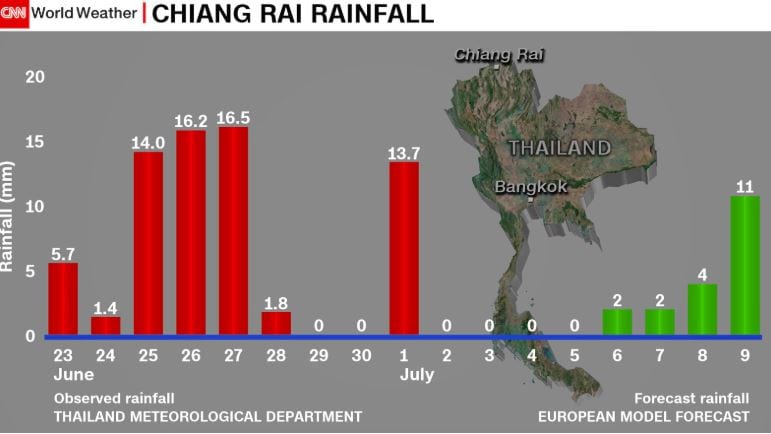 Officials said Friday oxygen levels are down to around 15%, and an air hose has been installed to pump more inside the cave to ensure levels don’t fall further.

But conditions are hard going — each dive, through submerged, darkened tunnels, takes dive teams 11 hours, round trip, from the command center to the boys’ cavern. 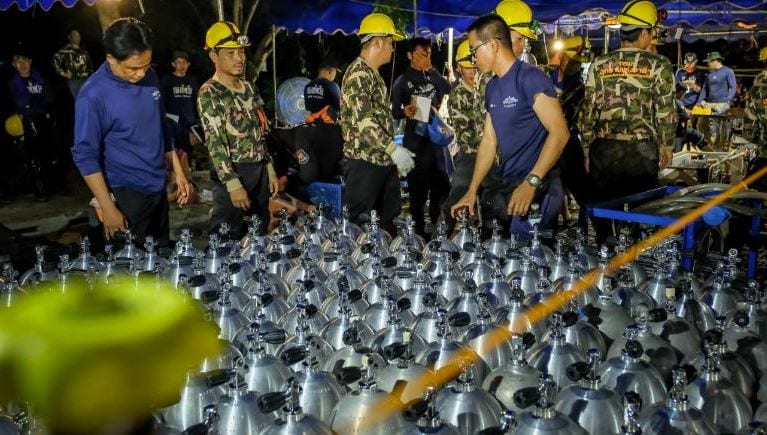 Divers have been delivering oxygen tanks to the boys, and placing them at intervals along the flooded tunnel.

Speaking to CNN Wednesday, Cade Courtley, a former US Navy SEAL said bringing the children out through the flooded tunnels could be treacherous.

He says that even divers with considerable expertise have been “climbing up, climbing through, going (through water with) zero visibility to finally get through the team.

“Now you’re going to ask 11 to (16) year olds — some of whom can not swim — to make that same journey for the first time breathing air underwater?

“I think that’s a terrible mistake given some of the options we have.”