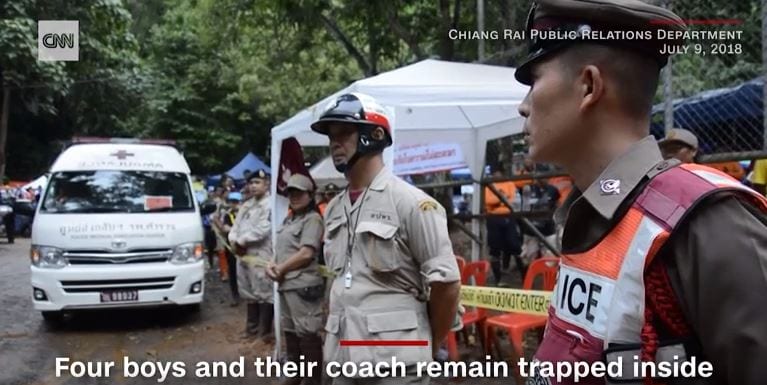 Divers and rescue workers in Thailand have begun what could be the final push to free four boys and their soccer coach still trapped in a cave in the country’s remote north, according to a Thai Navy official with knowledge of the operational details.

Eight of the boys were taken out of the cave during the first two days of rescue operations, but five others remain trapped on a ledge 4 kilometers (2.5 miles) inside the cave system.

The eight boys who have left the cave are being treated in an isolation ward in a Chiang Rai hospital. Medical officials told reporters Tuesday that they’re healthy, fever-free, mentally fit and talking.

One of the boys appeared to have lung inflammation, and another was admitted with a slowed heart rate but both are improving, said Dr. Jedsada Chokedamrongsook, the permanent secretary of the Thai Health Ministry.

Families of the first four have been able to see their children through a glass window, Chokedamrongsook said.

On Monday, family members told CNN officials hadn’t revealed which children had been rescued and who was still inside the cave. Families had vowed to wait at the cave entrance until all of the boys, and their coach, were taken out.

The rescued boys are being quarantined in case any of them contracted infections while inside the cave. The hospital has sent test samples from the boys to a lab in Bangkok.

They’re all likely to stay in hospital for seven days due to their weakened immune systems, Chokedamrongsook said.

Rescuers are racing to remove the remaining five members of the Wild Boar soccer team from the cave before the return of heavy monsoon rains.

A few days of relatively clear weather has allowed them to pump enough water out of the cave to allow the boys to walk through some sections.

Heavy rain began falling Tuesday as rescuers worked to replenish oxygen tanks for the third mission inside the cave.

Former Chiang Rai governor and rescue mission commander Narongsak Osotthanakorn said Monday night that it would take 20 hours to prepare for the operation, but he cautioned timings could change depending on weather and water levels.

Rescue workers and divers are using the break to rest and prepare for the next phase of the grueling operation, which Osotthanakorn said involves some of the hardest diving in the world.

The boys were exploring the caves on June 23 with their coach when they were trapped inside by heavy seasonal rains. After they were found on July 2, officials cautioned it could take some time to get them out, but authorities decided to act with heavy rains forecast to hit the region.

After days of planning, the first four boys emerged Sunday after an arduous journey. Each boy was accompanied underwater by two divers helping them navigate the dark, murky water in the flooded tunnels. Each operation has taken at least nine hours.

The most dangerous part of the journey out of the labyrinthine cave system is the first kilometer, during which they are required to squeeze through a narrow flooded channel.

Rescuers need to hold the boys’ oxygen tanks in front of them and swim pencil-like through submerged holes. Having completed this section, the boys are then handed over to separate, specialist rescue teams, who help assist them through the remainder of the cave, much of which they can wade through.

Another four boys were rescued Monday. Four boys and their coach remain in the cave, but it’s unclear if authorities will try to extract them in a group of four or try to take the five out in a single mission.