The day Moi’s ‘rungu’ broke and the chaos that followed 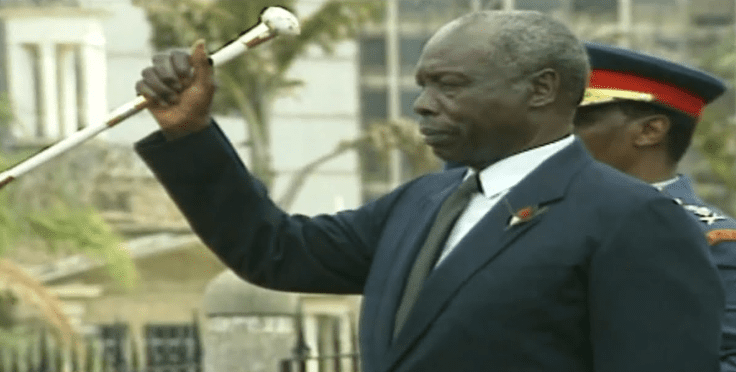 The late former President Daniel arap Moi, like his predecessor Mzee Jomo Kenyatta, had a mark of authority that he carried with him wherever he went.

For Mzee Kenyatta it was a fly-whisk, while for Mzee Moi, who died on February 4, 2020, it was a trademark rungu, a baton popularly referred to as Fimbo ya Nyayo.

The value attached to Fimbo ya Nyayo had perhaps never been seen until an incident in 1981 when the ivory baton fell and broke into two pieces while the president was in Los Angeles after attending the United Nations General Assembly in New York.

Even worse, this happened as Moi was getting ready to leave Los Angeles to attend the Commonwealth Heads of Government Meeting (Chogm) in Melbourne, Australia and there was no way he would appear in public without his mark of authority.

Speaking during a previous interview on Citizen TV’s Jeff Koinange Live show, Moi’s press secretary Lee Njiru, who was with the president during the incident, says calls were made to State House, Nairobi for a new rungu to be flown to Australia.

Njiru revealed that one of Moi’s aides Peter Rotich immediately swung into action, taking a flight across South East Asia via South Africa to deliver a new rungu to the president in Australia.

“We were heading to Australia to attend the Commonwealth Heads of Government Meeting (Chogm). We had to stay in Honolulu, Hawai because we had telephoned Nairobi, we got one of Mzee’s personal assistants called Peter Rotich. We told him to take two ivory batons go to Southern Africa and fly to Australia before we got there,” said Njiru.

“Rotich had to be there before Moi lands in Australia, since Mzee Moi had to greet people waving the baton which was akin to President Kenyatta’s fly whisk.”

Like clockwork, Njiru recalls, Rotich arrived on time in Australia, got into the President’s plane and handed him the baton.

Moi then disembarked the plane waving his trademark symbol of authority unbeknownst to people the chaos that had been witnessed by those closest to the president.

Njiru says this was one of the incidents that made him experience and appreciate the trappings of power.

A week before the UN General Assembly, Njiru recounted another incident of power at play.

Former Minister Prof. Julia Ojiambo had been sent by the president to lead the Kenyan delegation to the UN General Assembly but on arriving in New York she was denied access as she had forgotten her credentials back in Nairobi.

Njiru was immediately dispatched by the president to the US via UK to deliver the documents.

At Heathrow airport, Kenya’s High Commission to London was waiting to pick the package which was also awaited by three other envoys in New York.

“I flew first class because of credentials… Rotich because of an ivory baton. That is the time I started appreciating power,” said Njiru.

He, however, has a caution to all the president’s men: “But again if you are an idiot you think it is your power. It is called borrowed strength. Never boast. It can be taken away. You are not a piece of the president. You are just a messenger. That is where people get it wrong.”