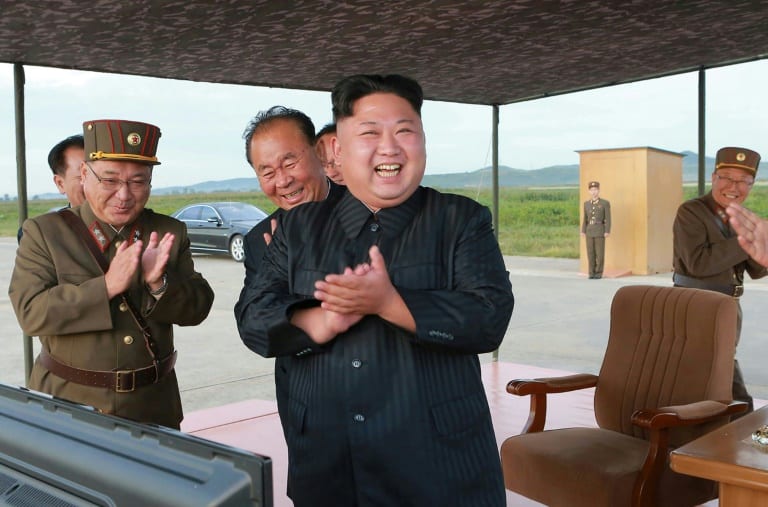 While the last North Korean nuclear test may make the international community roar , some countries in Africa still continue to trade with the hermit regime. Trade between the African continent and North Korea would have reached almost 200 million Euros in 2016.

In which city can one find an avenue Kim Il-sung, former leader of North Korea and grandfather of the current leader Kim Jung-un? In Pyongyang of course, but also, more surprising, in Kampala.

The Cold War is over, but not on the mainland, where there are still some die hards to support even against the odds – and for a few dollars handles – the North Korean dictatorship.

North Korea has thus become a specialty in the construction of imposing and sometimes dubious monuments on the continent. Mansudae Overseas Project has erected its statues in nine African countries, as in Namibia , the Independence Memorial or, in Senegal , the African Renaissance Monument.

But statues are not the only source of income in Pyongyang Africa.

“While some countries, such as Zimbabwe and Uganda , formally distance themselves from North Korea, Pyongyang has maintained economic and military ties with several African countries, ” said Samuel Ramani, a North Korea specialist at the University Oxford.

This is particularly the case in Namibia, where two North Korean military conglomerates have been operating since 2016; of Nigeria , which has maintained cooperation agreements with Pyongyang; of Angola , from Equatorial Guinea , the Eritrean and the Ethiopian, where North Korean government bank accounts are hosted and used to buy weapons. ”

A UN report released this year confirms these banned relations between many African countries and North Korea.

Relationships which mainly concern the sale of North Korean weapons that have even been found used by peacekeepers in the  Central African Republic.

“The expert group’s investigations have revealed the existence in the past of an arms trade and cooperation activities of the Democratic People’s Republic of Korea in Africa, including clandestine activities carried out on a large scale,” states the 2017 report.

Eleven African countries out of fifty-four do not respect the sanctions measures voted by the United Nations. “For many, these are countries on the margins of the international community and who need military equipment,” says Ramani.

UN investigators track the delivery of weapons to Joseph Kabila’s regime, including automatic pistols for the presidential guard. The Congolese president, who became fond of North Korea as the international pressure to leave power became more pressing.

Thus, the interception in August 2016 of the Jie-Shun in the Suez Canal. This North Korean ship carried 30,000 PG-7 rockets to the DRC. Weapons hidden under 2,300 tons of limonite, a cluster of microcrystalline iron hydroxides, in violation of UN resolutions.

Another example is Angola, where victory in the last MPLA elections in power since 1975 should make the North Korean generals smile, whose instructors continue to train members of the presidential guard to the martial arts.

In Namibia, the UN report also shows the construction of an arms factory and a center for training military by companies North Korea Mansudae Overseas Project and Korea Mining Development Trading Corporation (KOMID). The United States considers KOMID as one of North Korea’s leading arms dealers.

Overall, trade between Africa and North Korea have reached nearly 200 million in 2016. Fishing, minerals and especially arms and continue to supply foreign currency Foreign fragile cord that allows Korea of the North to survive the sanctions.

Relations between Africa and North Korea have remained constant since the wars of independence in the 1960s and support for pro-communist liberation movements. This boost from Pyongyang to some African countries has changed over the years and international sanctions in discreet support of certain African regimes to North Korea, allowing it to quietly bypass the sanctions of the UN under a common veneer : the struggle against Western imperialism.

On these countries, China could put pressure. But it is unlikely that she will meddle directly with African affairs, especially as she is sometimes involved in it.

The North Korean Embassy in Beijing, according to the UN, was said to finance the transport of North Korean missile components to Egypt via the Chinese company BLH Global Cargo Co. Ltd. China-Africa trade is a good cover for the Pyongyang trade on the continent, as shown by the interception in 2016 of a delivery of Chinese and North Korean weapons to this time from Eritrea. The United Nations thus points out the role of Chinese companies that serve as hedges for the transport of these cargoes to Africa and to cite several companies in Beijing and Hong Kong having a place.

“China’s reluctance to strictly enforce UN sanctions against North Korea is a blank check made to African countries, according to academic Samuel Ramani. China has not taken any steps to put pressure on its African partners, unlike the punitive measures taken against Namibia by Japan or against Egypt by the United States. ”

The South Korea also began an extensive program to oust North Korea outside the continent suddenly promises and dollars.

“Pyongyang remains a very attractive partner for some African countries despite UN sanctions. Firstly because it sells weapons to anyone and then because it provides training and technology transfer. China, Russia and the United States sell weapons, but do not allow buyers to locally produce ammunition, for example, or some equipment. North Korea provides sales, training and even local production. All at very attractive costs and far from the radars of the international community,” concludes Samuel Ramani.