The other side of former Attorney General Charles Njonjo 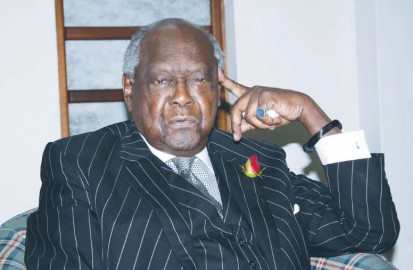 He has been termed by many current and former government officials as one of Kenya’s best inaugural lawyers who defined the making of a republic.

Even though Charles Njonjo has been hailed for his astute organizational skills, there is a dark side of his legacy. One who was seen as high-handed, vindictive and whose ambition trampled on many political opponents.

As is usual when a public figure dies, many public officials sent their condolence messages upon the passing of Charles Njonjo. But Chief Justice Martha Koome’s message appears to have ruffled many a feather.

Koome stated that Njonjo "distinguished himself as a lawyer and was a great encouragement to other members of the black bar." A section of lawyers could hear none of it.

US-based Legal academic Professor Makau Mutua disagreed with Koome saying "Njonjo will go down in history as one of the most malignant antiblack, vindictive and anti-democratic officials in Kenya."

Former LSK Chair Ahmednassir Abdullahi found CJ’s statement not truthful. This perhaps informed by the many accounts that Njonjo, the son of a paramount chief and oblivious of the colonial struggle wasn’t so enthusiastic about the Africanisation of the government. To the extent that some say he was opposed to the idea of certain professions being accessed by Kenyan natives and in particular black Africans

But it is a dig-up into the history books that reveals a rare official account of Njonjo’s dealings. A report of the judicial inquiry against Njonjo commissioned by President Daniel Moi in July 1983 gives an account of allegations against NJonjo most of which were confirmed.

Njonjo for instance is accused of personal vendetta against opponents; legal inconsistencies in the release of prisoners some of whom he released from his house for political mileage.

Njonjo was found to have traded favours with fellow politicians and ministers executing actions that only he could.

Abdalla Ndovu Mwidau, a former MP of Mombasa South, suffered loss through the actions and influence of Njonjo. He had previously served as a councillor in Mombasa and had been working with S.G.S company for 28 years.

In 1979, he decided to return to politics and run for a parliamentary seat. The Judicial inquiry report accounts that despite securing party clearance, Njonjo instructed that Mwidau had to choose to either keep his SGS job or run for politics. SGS was not a government firm and so Mwidau wondered why the influence.

Njonjo would tell Mwidau it is the then president Daniel Moi that wanted him to choose which way. Njonjo and Mwidau would eventually agree that he could run. He won the seat but was eventually forced to quit the SGS company.

Mwidau was forced to an early retirement losing all benefits that included educational fees for thirteen children. It would later emerge that SGS parent company was on the verge of losing a contract with the Central Bank of Kenya forcing the directors of the firm to bulge to pressure. The report details that the then Managing Director believed Njonjo to be the government.

Later, Njonjo would apologise to Mwidau saying that was a very big mistake. It had been informed by Njonjo’s clamour to control local governments across the country and had been using local politicians to meddle in local elections. Mwidau would appear not to have been in the right books of Njonjo.

Another encounter was in January 1981 when Njonjo shipped in excess baggage through the national carrier Kenya Airways. He had not paid for 270 kilogram worth of baggage in a flight from London. Security staff brought it to the attention of senior police officer Esau Kihumba Kioni.

Kioni raised the alarm and checked with the management whether the luggage had been paid for. it had not and so the matter was escalated with an invoice of 36 thousand shillings sent to Charles Njonjo. He never paid and instead summoned the top management of KQ to his office alongside the then permanent secretary of transport Simon Mbugua.

Kioni was quarrelled by Njonjo who accused him of witch-hunt. Thinking the matter had been settled, Kioni was later sacked from KQ. He returned to his job at the special branch but didn’t last. At 40 years of age he was retired in what was termed, “public interest”

Many accounts indicate that Njonjo had harboured presidential ambitions. That even though he facilitated a smooth transition from the late Jomo Kenyatta to Daniel Moi as president, he was behind the scenes crafting a political machinery.

Francis arap Mutwol, a former MP for Kerio Central, told the Inquiry commission that he had been offered money to recruit several MPs to Njonjo’s side. He told that Njonjo had revealed to him a list of MPs that he thought were not useful to him or the then government.

They were according to the report, former Nyeri MP Waruru Kanja, Mark Mwithaga of Nakuru town, Koigi wa Wamwere of Subukia, Martin Shikuku of Butere and Samwel arap Ng’eny of Aldai. Mutwol claimed that Njonjo told him, he would do his best to get rid of them. Most of the said MPs served jail terms or exile at some point, including Mwithaga who was reelected while in prison.

“At one point Moi asked me, what do people say Njonjo is. I told him according to people the most powerful person in this country is Charles Njonjo. If he wants you in jail, even if you have not done anything at all, you are going to end up in jail. Funny enough, Moi started laughing at my answer. He laughed!!”  former Koigi wa Wamwere previously said.

Njonjo was found guilty of most of the accounts but was pardoned by President Moi, heralding the end of his political power handing him an early retirement to a quiet life.

Chief Justice Martha Koome noted, “Njonjo’s legacy will also serve as an inspiring reference for Judges, Judicial Officers and Advocates on the fundamental considerations of trial preparation to expedite access to justice.”

A man who was many things to different people. A man whose grip on the state law office was not in doubt. Executing his assignments with shrewd efficiency.