‘They should’ve named Jogoo Road after me,’ Francis Atwoli now says as he blames vandalism on envy 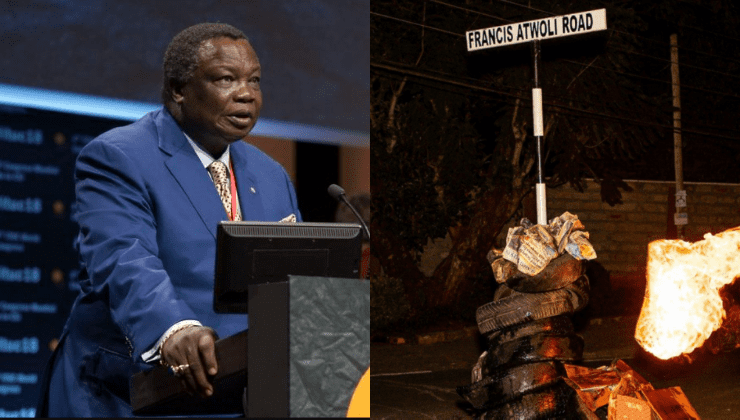 Central Organization of Trade Unions (COTU) Secretary General Francis Atwoli now says he did not lobby for the road in Kileleshwa to be named after him, neither has he met the person who proposed him.

The COTU boss, speaking during a press address on Thursday in Nakuru, insisted Dik Dik road was renamed the Francis Atwoli road by the county government due to his contributions to the city.

According to Atwoli, the suggestion was made by an MCA in the Nairobi County Assembly and the response was unanimous and that he had absolutely nothing to do with it.

He said if it were up to him, or had he been asked, then he would’ve chosen a more prominent road to be named after him in the city, further citing envy as the major contributing factor to the constant vandalism of the road sign.

“I have never met the boy who did the proposal (for the road to be named after me), I’m told the young man is an MCA from Ngara, and when he mentioned my name the Assembly went wild, it was unanimous. I was just told that on such a day they would be honouring me and that if I’m around I should avail myself,” he said.

“I didn’t lobby for that, I don’t need to lobby for such a small road, I’m known worldwide. These small road people who are making noise, it is just about being envious for nothing. Let heroes be celebrated when they’re alive, don’t name a road after me when I’m dead, I will curse you. I was born in Nairobi, I lived in Nairobi, I need a bigger road than that, they should’ve name Jogoo Road, formerly Donhol Road in Eastlands where I was born, after me.”

He added: “I have a lot of volunteers and supporters who have said they will be going there to look for those guys who are doing those things (vandalising). Some few disgruntled politicians and bloggers are behind it for nothing because they want to blackmail me. The other day they said I married a 23-year-old girl yet I was with my wife at the Coast.”

COTU chairman Francis Atwoli on a road being named after him.
“I don’t need to lobby for such a small road. I need a bigger road than that… Jogoo road should have been named after me.” pic.twitter.com/mmn03gGX24

Images of the Francis Atwoli road sign, formerly named Dik Dik road, in Kileleshwa being burnt down emerged on social media on Tuesday.

This came following the announcement that Atwoli was on Monday morning re-elected for a record fourth time as a Member of the International Labour Organization (ILO) governing body in Geneva, Switzerland, for the period 2021-2024.

The trade unionist however expressed nonchalance at the act of burning down the road sign saying it will not affect him as he is already known world over.

“Bringing down an honorary road signage under my name doesn’t hurt me. On the flip side, it will haunt, for life, those who are behind it. For how does it benefit them? How do you sleep at night knowing you are a vandal?” He posed.

“My name is all over the world and one doesn’t require a street signage for them to know who Francis Atwoli is. The name will live in posterity taking into account my years of selfless service to the workers in Kenya and the world. “

He added: “If anything, the signage was just an act of honour bestowed to me by Nairobians taking into account my many years of service.”

The road which was named in honour of the trade unionist in May this year was removed by unknown people shortly after that, before Atwoli announced that the county government had re-erected it and put CCTV in place to monitor it from vandals.