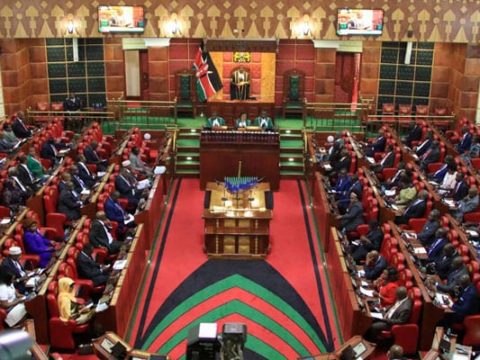 The National Assembly has lined up three amendment bills to the Constitution as focus now shifts to the Parliamentary initiative drive to effect changes to the supreme law.

The Parliamentary Constitution Implementation and Oversight Committee (CIOC) has proposed for presidential poll losers to be nominated to Parliament and Cabinet Ministers to be drawn from among elected MPs. The amendments are seen as a move to remedy the proposals contained in the sunk BBI referendum bill.

The committee proposes amendment of Article 152 of the Constitution on Cabinet and wants Clause 3 on Cabinet composition prohibiting parliamentarians from sitting in cabinet deleted.  In its place, the committee has proposed a repeal of the clause with, and replaced with a clause that states that: “the president shall appoint cabinet secretaries under clause 2 from among members of parliament.” The same will apply at the county level where governors will appoint MCAs to their Cabinet.

The Attorney General will also sit in Parliament as an ex-officio member with assigned function.  The Constitution of Kenya (Amendment) Bill 2020 proposes a new clause under the role of the president where it stipulates, that the President may assign the Attorney General the duties of a Cabinet secretary.

The bill has undergone public participation across various counties. The committee in a different amendment bill to the constitution is proposing the nomination of presidential poll losers into parliament.

“It is unfair for someone who got 6.7 million votes to be kept out and the only place he can articulate the issues he thinks are good for the country is funerals,” argues MP Jeremiah Kioni, who is chair of the CIOC.

The push to go the parliamentary way to effect changes to the Constitution has gained momentum after the sinking of the BBI referendum bill at the Court of Appeal. The provisions being championed by Constitution Implementation and Oversight Committee being some part of  proposals contained in the flopped BBI bill.

“There are some of the gains that can be salvaged through a parliamentary initiative, some of them can start being initiated through parliament,” says Senator Cleophas Malala.

“Now this is the time to test the political will, seriousness and genuineness of those MPs who claimed they were supporting BBI,” said Meru Governor Kiraitu Murungi.

But parliament is only limited to make amends to chapters in the constitution that do not require a referendum. Atleast 10 chapters are cushioned and any changes on them would require direct people’s  approval in a referendum. This including the chapter on the bill of rights, the president’s term in office, judiciary independence, functions of parliament and the structure of devolved governments among others.

“The judgement on the basic structure by the Court of Appeal needs clarity otherwise the judges seem to say our whole constitution is subject to basic structure meaning we cannot touch it without getting the court to tell us whether what we are even proposing to amend in parliament is part of the basic structure,” adds Kioni.