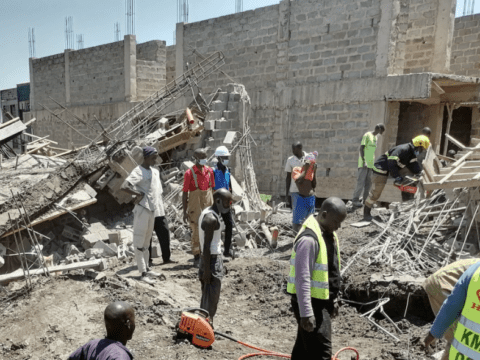 Three people have been confirmed dead and six others injured after a two-storey building collapsed in Mamboleo area, Kisumu County, on Monday.

The bodies of the deceased have since been taken to the Jaramogi Oginga Odinga Teaching & Referral Hospital (JOOTRH).

The injured are being treated at the same hospital where they are in stable condition.

Eye witnesses said workers were on site when the building came down but most of them managed to get away.

They told Citizen Digital that the building had visible cracks on it, hence it was just a matter of time before it came down.

Regional Coordinator of the National Construction Authority (NCA) Eng. Amos Musau said the authority in August 2020 issued the owner of the building with a notice for closure for not adhering to building regulations.

Eng. Musau added that they were shocked to learn that the owner of the building resumed construction, adding that investigations will be done and action taken.

He further stated that the contractor of the building has been arrested but the owner is still at large.