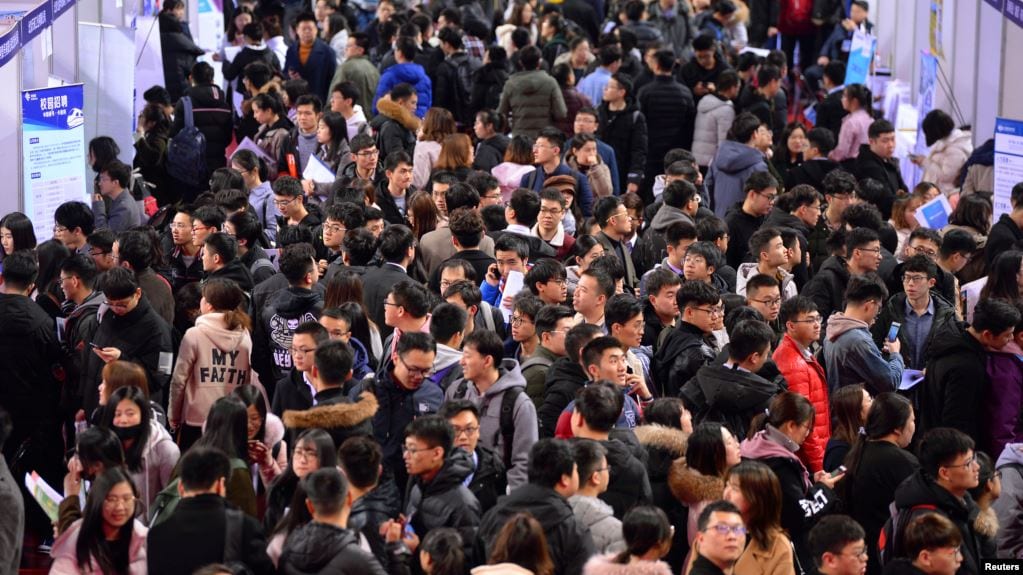 A record number of 8.34 million university graduates are set to enter the Chinese job market this summer amid escalating trade tensions between Washington and Beijing.

Observers say that as China’s export-dependent economy braces for more hits from tariff hikes, which U.S. President Donald Trump recently imposed, the country’s job markets will be tighter for everyone including fresh graduates.

And the impact of a job mismatch among college graduates has long weighed on their actual employment rate at only 52% this year, according to a recent survey.

That means more than 4 million graduates will soon join the ranks of those unemployed, although many of them may opt to pursue higher education, the survey found.

“Graduate employment has always been problematic in China. Given the current situation with the trade war, I think we should expect it to be even more so this year,” said Geoffrey Crothall, spokesperson at China Labor Bulletin.

Graduates will either take longer to find a job or settle with one that has lower pay or poor career prospects, Crothall said.

Making matters worse, the number of job opportunities in China is on the wane as China tries to move away from labor-intensive industries, said Wang Zhangcheng, head of the Labor Economics Institute at the Zhongnan University of Economics and Law.

“The transformation of industrial structure and the U.S.-China trade war [is making the situation worse]. Also, China’s economy no longer grows at a fast pace. Instead, it has matured with mid- to low-paced growths. Under such circumstances, the demand for labor has declined,” Wang said.

“Plus, many jobs have been replaced by robots as a result of the development of artificial intelligence in the past two years. That surely adds pressure on job seekers,” he added.

A recent report by Renmin University of China (RUC) and career platform Zhaopin.com found that the number of job seekers in China grew 31% year-on-year in the first quarter – the highest growth in workers since 2011 — while the number of job vacancies shrank by 11% at the same time.

China’s job market prosperity index has dropped to a record low since 2014, it concluded.

Official data showed that China’s surveyed unemployment rate in urban areas stood at 5.2% in March, down 0.1 percentage points from February.

Analysts described the country’s job markets as “stable overall” although the surveyed unemployment rate in 31 major cities went up 0.1 percentage points month-on-month, to 5.1% in March – the highest since late 2016.

Still, China’s State Council has made “saving jobs” one of its top policy priorities since late last year, offering incentives for firms with no or few layoffs and subsidies for internships or on-the-job training.

And college graduates remain a focal point of the council’s employment stabilization plan, along with migrants and laid-off workers.

Any refusal may risk their chances of thesis defense or diplomas.

Such agreements are nonbinding on the employers to offer jobs, but distort the overall graduate employment rate, which has allowed universities to attract new students – a fraud that the Ministry of Education now forbids.

In a recent notice, the ministry has disallowed universities from withholding graduates’ degree certificates if they refuse to sign such agreements.

In spite of the ban, graduates still complain about “being forcefully employed.”

On Weibo, China’s Twitter-like microblogging platform, one user wrote, “Our school still forces you to sign the agreements. The career adviser calls every day, pulling a long face.”

One user urged that unless the government writes the ban into law and imposes penalties, no universities would comply.

Another cause of concern for graduate employment is the long-standing mismatch between the knowledge and skills students have acquired from years of studies in universities, and the private sector’s actual job requirements, professor Wang said.

Given the shifts of production paradigms and “widening structural gaps in labor forces allocations, many of our universities have set up professional courses which may not keep up with the changing [requirements] of the labor markets. That leads to the scenario that many graduates may not find the right career fit for their skills,” the professor said.

As a solution, the education ministry has encouraged universities to focus on fundamentals by providing multifaceted cultivation of talents, so graduates leaving school will meet what different jobs require.