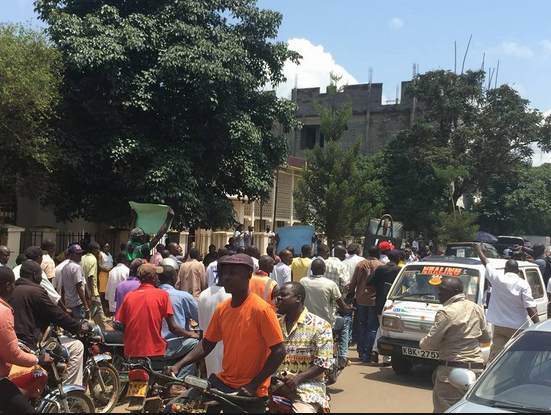 Normal operations were paralyzed in Cherangany town, Trans Nzoia County on Saturday afternoon after irate Yuya residents held demonstrations over the increased killings of boda boda operators in the area.

The residents said the killings have been caused by the poor state of the roads in the area that forces the operators to park in dangerous zones where they are attacked and killed.

They also called on Trans Nzoia Governor Patrick Khaemba to intervene and repair the road.

Langata Administration Police Commander Patrick Kyengo said tension began in the morning after one suspect was nabbed with a stolen motorbike by the boda boda operators who had launched a search for the missing motorbike.

The suspect later decided to take the residents where the stolen motorbikes were hidden leading to a confrontation between the boda boda operators and area residents against the robbers.

Police intervened immediately and arrested the suspects as they continue with investigations.