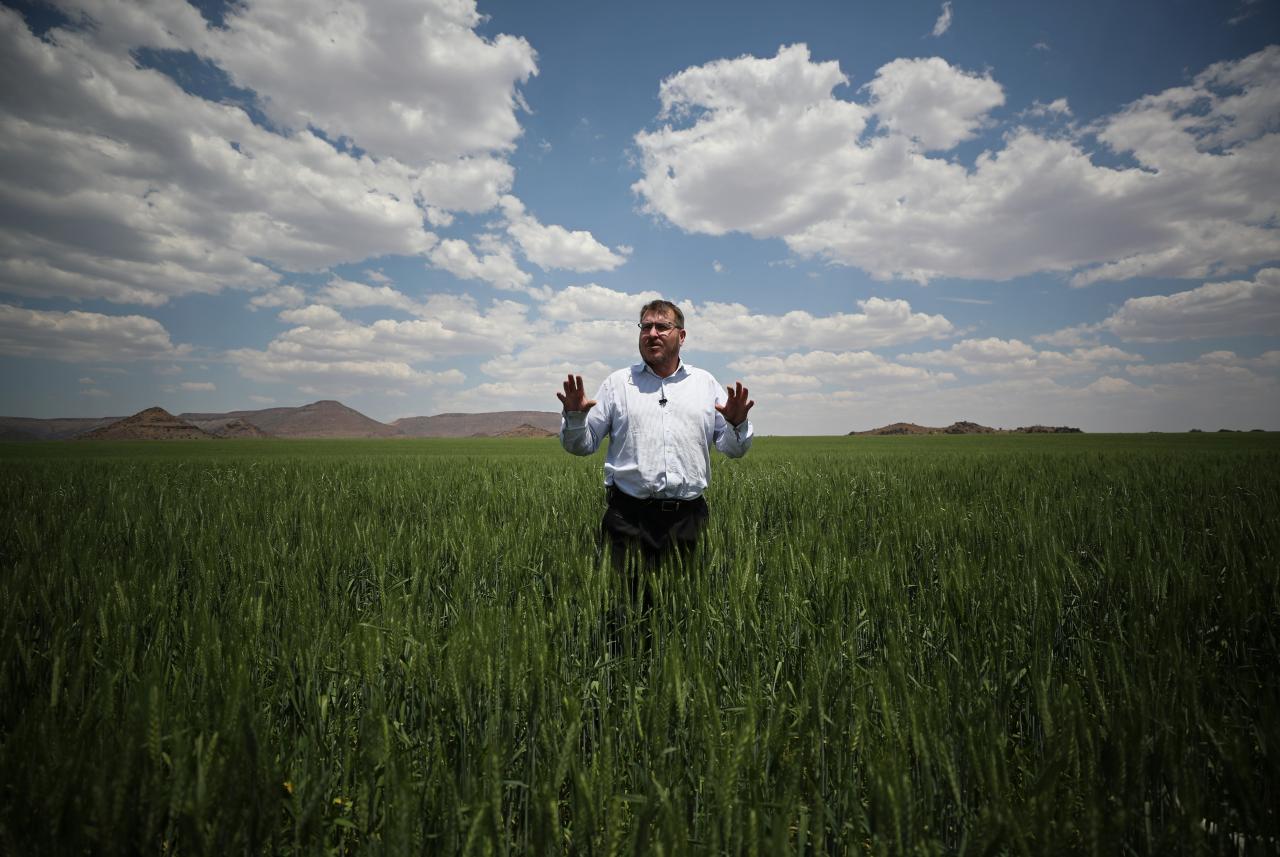 When U.S. President Donald Trump pledged to investigate large scale killings of white farmers in South Africa and violent takeovers of land, Pretoria said he was misinformed. Elsewhere, there was quiet satisfaction. For a little-known South African activist group, Trump’s intervention, following a Fox News show criticizing the land reform plans of President Cyril Ramaphosa’s ruling African National Congress, signaled a job well done. “The best possible outcome that we hoped for was for a statement by the president of the USA, which we got,” Ernst Roets, deputy CEO of Afriforum, told Reuters in his office in a quiet suburb of the capital. The office walls display photographs of street protests by Afriforum, stepped up this year against land distribution plans and what it calls the targeted killing of white farmers. In South Africa, no land has been seized and while violent crime is a huge problem, the vast majority of victims are poor and black. Of 20,000 murders in the last recorded year, 46 were white people killed on farms, according to police data. Afriforum is an interest group representing Afrikaners – the 5 percent of the population descended mainly from Dutch, German and French settlers. It belongs to a wider movement called Solidarity, which has grown from a 100-year-old trade union into a sprawling and well-resourced organization offering education and training and a range of other services in Afrikaans. Ramaphosa’s vague pledge this year to pursue land expropriation without compensation to right the wrongs of apartheid has given new impetus to both groups, who have brushed aside his insistence he will protect property rights. Critics, including some prominent Afrikaners, accuse them of stirring racial fears at a time when Ramaphosa is trying to defuse threats of unrest from a far-left party. Solidarity says it reflects fears rather than stirring them. “On expropriation, they can’t threaten that sort of thing and not expect a reaction,” Flip Buys, chairman of the umbrella movement, said by telephone. “Some battles you must fight. We must save the country from what happened in Zimbabwe,” he said, referring to the widespread violent takeover of white-owned farms in the early 2000s. More fringe white groups, including the survivalist Suidlanders, have been warning for decades that Afrikaners are under threat. But Solidarity and Afriforum are working at a different level, holding prominent protests, lobbying foreign governments and preparing to approach the United Nations to request land expropriation be recognized as a breach of human rights.

Afriforum and COPE, a party formed by dissident ANC members with three seats in parliament, said they met senior U.S. embassy officials on Monday to ask Washington to put pressure on South Africa to protect property rights.
The U.S. embassy said COPE and AfriForum delivered a petition to one of its officials.

Hijacked Conversations with a dozen members of Afriforum at its rallies and elsewhere, reviews of its social media accounts and private text messages sent by its members reveal an increasingly influential movement with an agenda that divides South Africa. Roets had appeared on Tucker Carlson’s Fox News show in May where they spoke about what they called targeted killings of white farmers and plans to take land along racial lines. The government, academics and a wide range of commentators say neither is happening, but right-wing journalists from Canada, Britain and Australia have made programs on the issue. “Afriforum has understood this emergence of white chauvinist identities around the world and is manipulating it for its own ends,” said Adam Habib, vice-chancellor at the University of the Witwatersrand in Johannesburg. “The problem with that is it will fracture our communities.” Max du Preez, an Afrikaans-speaking author and commentator, said Afriforum did not represent the community and did it a disservice by making it seem racist. “If black people want to insult an Afrikaner they call him Afriforum,” he said. Roets denies Afriforum preys on white people’s fears and said it was employing the same tactics as the ANC used in the 1980s to build pressure on the apartheid government.

“We learnt from the best. We have found the South African government is very sensitive to international criticism.”
Trump’s intervention stole the limelight during Ramaphosa’s high-profile visit to the U.N. general assembly in September.

Ramaphosa made light of Trump’s comments but an ANC source said he was very angry. Every president since Nelson Mandela led South Africa out of white-minority rule in 1994 has tried, and largely failed, to redress an imbalance whereby whites – nine percent of 56 million South Africans – own more than 70 percent of agricultural land. Ramaphosa is competing in next year’s election with a far-left party exploiting anger at persistent rural destitution among blacks alongside wealthy, white-owned commercial farms. That party, the Economic Freedom Fighters, has threatened to nationalize all land and urged people to occupy it – calls which have so-far gone unheeded beyond a few groups erecting shacks on unused plots. Ramaphosa, who replaced scandal-plagued Jacob Zuma in February, has said reforms will not harm the economy, investment or food security and that unused land in towns and cities would be a high priority. He has given few details, but has the support of most big businesses and foreign investor community. Trump’s tweet unnerved investors and drove down the rand and share prices, although they subsequently recovered. “I have asked Secretary of State @SecPompeo to closely study the South Africa land and farm seizures and expropriations and the large scale killing of farmers,” it said. A U.S. embassy spokesman said it was continuing to evaluate various issues, including land, as normal. State within a state Solidarity contains around 20 organizations, including a media company, a university and an investment fund. Its half a million members pay fees and a property portfolio and stock market investments are among other funding sources. Reuters spoke to Afriforum members who believed the Afrikaner community was under threat and felt Solidarity was the only support network they could rely on.

Some described Solidarity as a “state within a state”.
Roets said Afriforum’s membership was growing but it had no intention of trying to carve out a de-facto white state.

“There are certain buzzwords that we like to use and we encourage among our membership and those are words like ‘self-reliance’ like ‘self-help’ like ‘independence’,” he said. “If you want to describe that as a ‘state within a state’ that’s fine.” The Suidlanders, meanwhile, are preparing for battle. In an isolated outpost town on the Orange River, they say they expect an “imminent” racial civil war. Hoarding guns, clothes and food in bunkers hidden in the dry barren landscape, its growing membership has drawn up a detailed plan to carve off a section of the country. “Some people think we are racists. It’s totally not the case. We are purely and simply a civil defense organization,” Suidlanders spokesman Simon Roche told Reuters. Roche, who showed Reuters caravans filled with supplies ready for when “war” breaks out, says he has traveled to Washington and Europe to meet with like minded groups and with politicians, although he declined to name them. “We must tell the world what is coming. People can call us conspiracy theorists. Soon we will see who was right.”