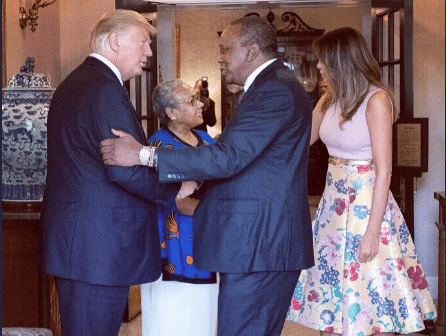 “First Lady Melania and I were honored to welcome the President of the Republic of Kenya, Uhuru Kenyatta and Mrs. Margaret Kenyatta to the White House today!,” his tweet reads.

The message was posted about an hour after the two leaders held a bilateral meeting in the Cabinet Room.

.@FLOTUS Melania and I were honored to welcome the President of the Republic of Kenya, @UKenyatta and Mrs. Margaret Kenyatta to the @WhiteHouse today! pic.twitter.com/ZU5MovNKt8

U.S. First Lady Melania Trump said she was pleased to have hosted her Kenyan counterpart.

“It was a pleasure having First Lady Margaret Kenyatta at the White House today. I enjoyed learning about Beyond Zero and discussing our shared concerns for the well-being of children,” her tweet reads.

President Uhuru Kenyatta is the third African leader to hold talks with Trump at the White House.

The first one was Egyptian President Abdel Fatah al-Sissi in April 2017 while the second was Nigeria’s Muhammadu Buhari in April this year.

On Monday, President Trump came under heavy criticism after a report claimed he had described Nigerian President Muhammadu Buhari as “lifeless” after their meeting at the White House.

According to the Financial Times, Trump allegedly told his aides that he never wanted to meet someone so lifeless again, in reference to the 75-year-old Nigerian leader.

This is in stark contrast to his meeting with Egypt’s Sisi who Trump praised as having “done a tremendous job under trying circumstance”.

During their meeting, Sisi complimented Trump saying that had a “unique” personality and was capable of doing the impossible, to which Trump responded by complimenting his shoes.

The Independent later reported that Trump said he would plan a visit to Egypt “very soon”.