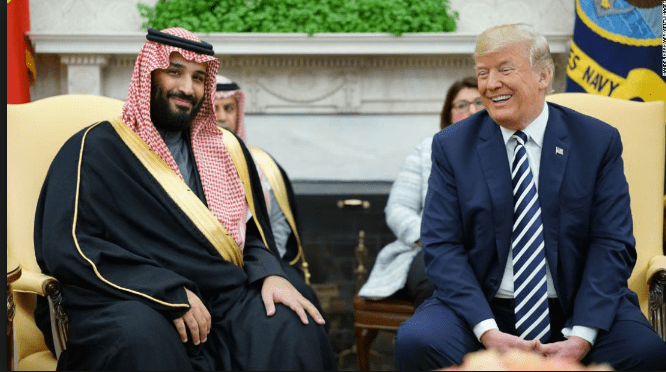 Turkey’s foreign minister has accused President Donald Trump of turning a blind eye in the high-profile murder of Saudi journalist Jamal Khashoggi, a day after the US leader doubled down in his defense of Saudi Crown Prince Mohammed bin Salman.

During a Thanksgiving call with US troops on Thursday, Trump again undermined the CIA’s assessment that bin Salman had personally ordered Khashoggi’s killing. Saudi officials admit that the Washington Post columnist was killed at their consulate in Istanbul, Turkey, last month but have vehemently denied that bin Salman was involved.

“In a way, Mr. Trump’s statement means ‘Come what may, I will turn a blind eye on this.’ This approach is wrong. Money is not everything. We should not distance ourselves from human values,” Turkish Foreign Minister Mevlut Cavusoglu told CNN Turk, a CNN affiliate.

“We found the US President’s statement about MBS’s involvement where he said ‘Maybe he did, maybe he didn’t,’ interesting. What he based this on, we don’t know,” he said, referring to the Crown Prince by his initials.

Trump has been the Crown Prince’s most powerful international ally during the fallout of Khashoggi’s death, standing by the 33-year-old heir to the Saudi throne and prioritizing the US’ relationship with the kingdom.
On Thursday he said that the CIA’s assessment was merely based on “feelings” and was not conclusive.

“They have not concluded. Nobody’s concluded. I don’t know if anybody’s going to be able to conclude that the Crown Prince did it,” Trump said. “They said he might have done it. That’s a big difference.”

Trump continued to defend his decision not to blame the Crown Prince or issue more severe punishments, suggesting diminished relations with Saudi Arabia would cause “a global depression,” result in the loss of “hundreds of thousands of jobs” and leave Israel defenseless.

Trump has repeatedly pointed to the US’ lucrative arms deals with Saudi Arabia, and the kingdom’s power to temper oil prices and contain Iranian aggression in the region, as reasons to keep a response to Khashoggi’s death to a minimum.

The US has sanctioned 17 Saudi individuals after the journalist’s killing. A bipartisan group of senators has also introduced draft legislation to impose tougher sanctions that target arms sales.
Turkey has been the most vocal international critic of Saudi Arabia over Khashoggi’s murder, leaking evidence of what happened at the Saudi consulate piece by piece to keep the world’s attention on the kingdom, a longtime rival in the region.

But Turkey itself has a dismal record on protecting the media. The organization Reporters Without Borders calls Turkey “the world’s biggest prison for professional journalists,” as a government crackdown since an attempted coup in 2016 has gutted the independent press and led to lengthy jail sentences for reporters.

Many journalists spend more than a year in detention before even facing court, the group said.

Several other European countries have taken action against Saudi Arabia following Khashoggi’s murder, including Germany, France, Denmark and Finland, and have also used the opportunity to push Riyadh for a resolution to the Yemen war.