Turkish President under fire for views on women 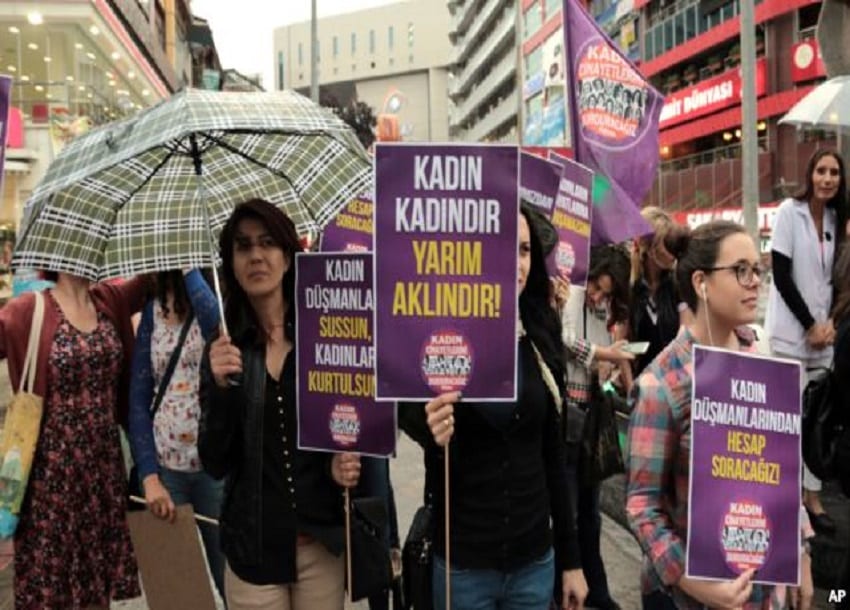 Turkish President Recep Tayyip Erdogan’s renewed call for the country’s women to forgo birth control and have at least three children has drawn ire from women’s rights advocates and is being questioned by Islamic scholars and political experts.

“We do not think that defining women over motherhood, and mulling over how many children they should have, or whether they should work or not, are among the main duties of the president,” said Sirin Mine Kilic, the secretary general of a nationwide women’s rights group, KADER.

“It would be more useful if the president could mull over issues such as murders of women, child abuse, unemployment of women, and violence against women,” she said in a statement issued to Turkish media.

Turkey currently has an average fertility rate of more than two children per woman, according to government data.

The statistics office said Turkey’s population rose to 78.7 million last year, a growth rate of around 1.3 percent. The population in 2000 was less than 68 million.

But that growth is apparently not enough for Erdogan, who wants to see an increased Turkish birth rate.

“I would recommend having at least three children,” Erdogan said, marking the opening of the new building for Turkey’s Women’s and Democracy Association this month.

“A woman who rejects motherhood, who refrains from being around the house, however successful her working life is, is deficient, is incomplete,” he said.

“No Muslim family should engage in birth control or family planning,” Erdogan said, calling on devout Muslims to have more children.

“We will multiply our descendants. They talk about population planning, birth control. No Muslim family can have such an approach,” Erdogan said in a televised speech. “Nobody can interfere in God’s work. The first duty here belongs to mothers.”

Erdogan has two daughters and two sons with his wife, Emine.

But Colak also told VOA, “If parents can’t live up to their material and spiritual responsibilities for their children, then Islam does permit birth control.”

Recep Akdag, the Turkish Health Minister, said he encourages having children but not under government orders.

“This is an issue for families to decide,” he said. “Nobody can force people to have children.”

Erdogan has annoyed many women’s rights activists with his comments on women and motherhood in recent years. He once described birth control as “treason.”

The Turkish Society of Obstetrics and Gynecology has slammed Erdogan’s statements on birth control as “violations of women’s rights.”

Ayse Gunaysu, a prominent Turkish women’s rights activist and author, told VOA that Erdogan is “extremely sexist. He carries all the anti-woman characteristics of an Islamist.”

But Seda Saribas, a young mother of two who was crowned Miss Turkey in 2006, said Erdogan is showing a positive stance on motherhood.

“Family is very important for society,” said Saribas, who recently was appointed to head the women’s branch for Erdogan’s ruling party in the province of Aydin.

“To increase the population of our nation is also important,” said Saribas, a member of the city of Aydin’s municipal parliament.

Some analysts have suggested that Erdogan’s views are motivated by changes in Turkey’s demographics, which show an increase among Kurds and foreigners.

According to Tarhan Erdem, founder and director of the Istanbul-based KONDA Research and Consultancy Company, the ethnic Kurdish population in Turkey will outnumber ethnic Turkish population in 2040.

Ankara does not officially recognize the existence of any Kurdish ethnicity in Turkey, and there are no official data about the country’s ethnic Kurd population. But, according to the CIA’s “World Fact Book,” Kurds make up 18 percent of Turkey’s population; Turks make up about 70 to 75 percent, with the rest described as “other minorities.”

Kurdish economist Tino Sanandaji told VOA that the Kurdish population has grown by 3 percent a year since the 1965 census, when Kurds represented 7.6 percent of the population.

“If the current trends continue,” Sanandaji said, “Kurds are likely to become the majority population in Turkey within a few decades.”