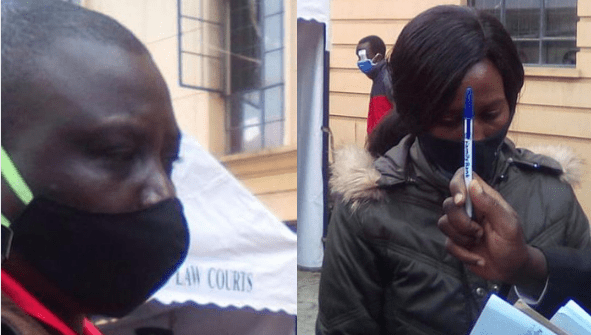 Two suspects were arraigned in a Nairobi court on Wednesday for allegedly leaking CCTV footage that captured President Uhuru Kenyatta and his entourage in the Nairobi CBD on June 2, 2019.

The accused; Patrick Rading Ambogo and Magoma Ayonga, were charged with the offence of unauthorized interception of computer data contrary to section 17(1) of the Computer Misuse and Cyber Crime Act.

They were charged that on June 2, 2020 at around 8pm they intercepted a security CCTV footage capturing the Head of State’s entourage along Kenyatta avenue.

Through their lawyer Danstan Omari, the two accused persons rubbished the charge levelled against them saying it does not exist in law.

“This alleged offence of intercepting a security CCTV does not exist in law. Our clients were never in State House and have never gone to any government installation to capture CCTV footage of government,” said the lawyer.

“We want the footage and shall be asking for statements of the Head of State and former Prime Minister Raila Odinga to show that indeed they were captured at that time of the night.”

According to the lawyer, the two accused persons are “mere casuals” at a hotel in the city.