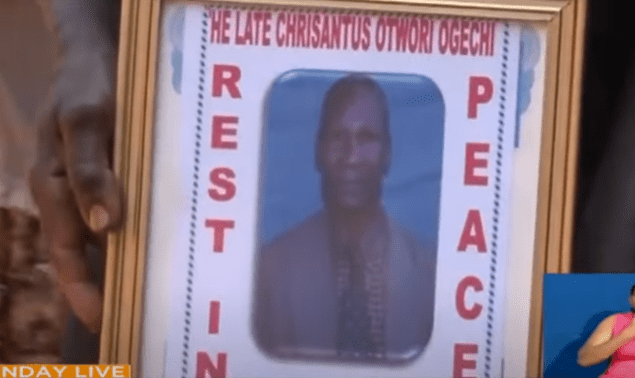 Two brothers are being held at the Kisii Central Police Station in connection with the murder of their 70-year-old father last week.

The two brothers are said to have killed their father before dumping his body in a borehole, with the family saying inheritance issues are what drove them to commit the crime.

31 pink, purple and yellow flowers decorate the grave of Chrisantus Otwori Ogechi, perhaps to take the edge off the pain for those near and dear who will visit, at least for the short time the flowers will remain alive.

For this village in Raganga, the death of Chrisantus has exposed the silent war that went on behind his gates.

The news of Chrisantus death and photos of his body being pulled out from the borehole were shared on social media Wednesday last week.

Moraa says that upon checking inside the borehole, she saw her father’s body.

The two brothers are under arrest by police officers and are being held at the Kisii Central Police Station after they issued contradicting statements.

According to the family, the two brothers wanted a share of their father’s wealth and land, upon which their father had built a home to take care of them and their four sisters.