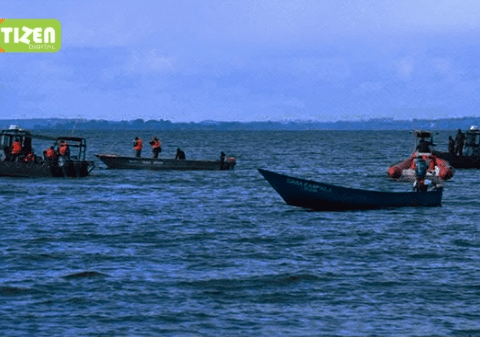 Two people have been confirmed dead and eight others are still missing after a boat they were sailing in capsized in Lake Victoria near Pier Beach within Homa-Bay town.

The victims were travelling to Ndhiru beach in Mbita Sub County on Tuesday evening when the incident occurred. Six on them have since been rescued.

The boat is said to have capsized about 400 meters away from the beach over suspected overloading of passengers and luggage whcih included bags of cement, timber, pieces of iron sheets and food stuff.

According to Homa-Bay township location Chief Joshua Ochogo, the two bodies include that of a woman and a one and half year-old minor who were retrieved during the rescue mission by fishermen who responded to the passengers’ distress call.

He confirmed that the six passengers who were rescued have been taken to Homa-Bay County Referral Hospital for treatment while bodies of the deceased were moved to the mortuary at the same facility.

Meanwhile a search mission by fishermen and well wishers is underway for eight other passengers who are feared dead.

The area chief said the boat was carrying passengers and luggage beyond its recommended capacity which might have caused the accident.

The administrator has warned passengers against boarding overloaded boats and urged them to always put on live saving gear to avert such incidents.