Two killed, one injured as walls collapse in Ruaka and Kalie 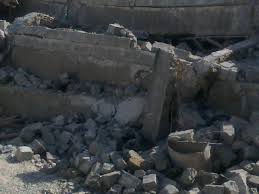 A man died and his workmate was severely injured at Ruaka town Saturday afternoon after the perimeter wall they were constructing collapsed.

According to residents of Ruaka town, the wall may have collapsed as a result of a sink hole that developed when a sewer that was in close proximity to the building caved in.

Kiambaa MP Paul Koinange condemned the disastrous ordeal, saying it may be attributed to the low solidity of red soil found in the area.

Similarly, a 6 year old girl died on the spot in Kalie Sub-County after a wall collapsed after heavy rains.

According to the area sub Chief Patrick Ndeti, the deceased was herding goats when the walls of an unfinished house fell on her.

Makueni police officers confirmed that the girl died on the spot.

Her body was moved to Makindu sub-county mortuary.

Meanwhile, Makindu residents have been warned not to attempt crossing flooded rivers in the region during the rainy season.